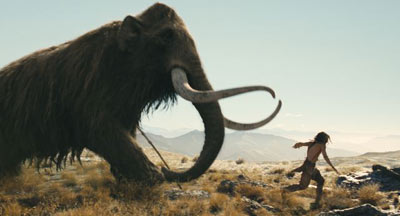 Two years of research and planning went into the creation of the mammoths and other ancient beasts in "10,000 BC."
Photo courtesy Warner Bros.

More than two years of planning, design, testing and rendering went into the creation of the mammoths and the other CG animals in "10,000 BC," which contains nearly 700 digital effects shots. And this was before the animators really began work. Real mammoths could grow to 18 feet tall, and each animated beast was covered in "billions of hairs," says Emmerich. "They had to react to each other in a fashion that is very, very complicated."

In April 2005, visual effects supervisor Karen Goulekas -- who had worked with Emmerich on "Godzilla" and "The Day After Tomorrow" -- came aboard. Her first order of business, a year before filming commenced, was to figure out what the animals would look like.

All the artists had to work with were illustrations of the ancient creatures, so Goulekas -- and the effects houses she hired, including MPC and Double Negative in London -- zeroed in on the closest living equivalents. The crew set out on observational expeditions, taking photos and video footage of elephants, ostriches and big cats. Some visited the London Zoo, and Goulekas went to the Tala Game Reserve in Durban, South Africa, to gather images and footage.

"I went there with two HD cameras, one to shoot the side view and one to shoot the front view as the animal moved," she says. "You sync the two together and you can do rotomation and key frame over the images of the actual animal. It's like a poor man's motion capture."

Next, creature designer Patrick Tatopoulos' team built maquettes (3-D models) based on the concept art, and the proportions and shapes of the creatures continued to evolve over more than a year and a half. "As you're animating you realize you need longer legs, or whatever," Goulekas says. "Then you do animation tests for four to six months and you learn what the problems are."

The mammoth design resembles an elephant, of course, in terms of features and skin texture. The mammoths didn't pose a problem in terms of facial movements (aside from eye blinks, ear flicks and open mouths) -- but there are many mammoths in the movie, all covered in long, individual hairs. In one scene they had to interact with a net made of mammoth fur. Initial renderings on the mammoths took more than 16 hours, and the fur eventually had to be toned down. "They started to look too puffy," Goulekas says. "Thinning out the fur helped our rendering time [and] made them look fiercer."

"Hands down, the most challenging thing in the film was the saber-tooth tiger," Goulekas says. "Everything in its face is moving subtly … too much draws your eye to it. Not enough and it doesn't look alive." Many adjustments were necessary to achieve the right look for the creature, which the animators based on the liger -- a lion/tiger hybrid. "If my eye is drawn to it, it's too much," she says. "I know we've gone too far."

The menacing "terror birds" were loosely based on ancestors of the ostrich. "I looked for the nastiest birds I could find, gnarled beaks and tufts of skin sticking out … I went to town with it," Goulekas says. "It was all about the beak, the tongue and the eyes darting around. They're pretty ferocious, chomping right at the camera."