by John Perritano
Prev NEXT
4 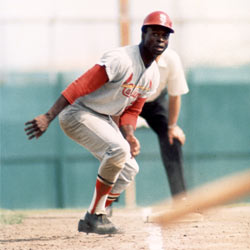 The Chicago Cubs traded Lou Brock to the St. Louis Cardinals for pitcher Ernie Broglio in 1964. Brock went on to hit .300 seven times from 1965 to 1979, led the league in stolen bases eight times and retired as the all-time steals leader.
Hulton Archive /Getty Images

When the Chicago Cubs traded Lou Brock to the St. Louis Cardinals for pitcher Ernie Broglio in 1964, it didn't seem like such a bad move. Broglio had won 21 games and lost only 9 in 1960. He was young and had many good years left in him, or so everyone thought. Brock, who had played for the Cubs for two-and-a-half years, didn't burn up Wrigley Field. His batting average with the Cubs in 1963 was a lowly .251, slightly worse than the .262 he batted the year before [source: Baseball Reference].

In his first game with the Cardinals, Brock struck out on three pitches. Then he caught fire. Brock hit .348 for the rest of the 1964 season and stole 33 bases. The Cards became champions of the National League that year. Brock found his stride with the Cardinals, hitting .300 seven times from 1965 to 1979. He led the league in stolen bases eight times, and retired as the all-time steals leader. Broglio, on the other hand, retired to the dust bin of history. He won only four games with the Cubs in '64, and left the game after 1966 [sources: Baseball Reference; Sports Illustrated].