by John Perritano
Prev NEXT
6 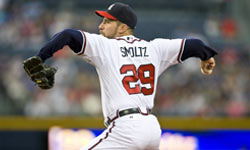 In 1987, the Detroit Tigers traded then-young-prospect John Smoltz for Doyle Alexander. By 1996, Smoltz had a 24-8 record and eventually became a Hall of Fame pitcher.
Paul Abell/Atlanta Braves/MLB Photos/Getty Images

Have you ever heard of Doyle Alexander? Probably not. Frankly, he wasn't a bad pitcher. The right hander knew how to throw strikes. In 1987, the Detroit Tigers were in the middle of a pennant race and needed another arm to close the deal. They traded a young prospect named John Smoltz for Alexander.

Drafted in the 22nd round in 1985, Smoltz was young and had a hefty 5.73 ERA in AA minor league ball. He walked more batters than he struck out. At the time, it was a good trade for Detroit. Alexander went 9-0 for the Tigers with a miniscule 1.53 ERA. He helped the Tigers win the American League Eastern Division, but they lost to the Minnesota Twins in the league championship game [source: Mensching].

Smoltz started out slow with the Braves. He won two of the 12 games he started in 1988. The next year, he had a 12-11 record. By 1996, Smoltz had a 24-8 record and eventually became a Hall of Fame pitcher. Among other accomplishments, Smoltz was an eight-time National League All Star, he won the 1996 Cy Young Award, he tallied 50 saves during the 2002 season and won the World Series with the Braves in 1995 [source: Baseball Reference].