by John Perritano
Prev NEXT
9

Mariners Get Rid of Randy Johnson 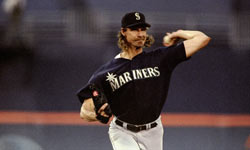 The Seattle Mariners traded pitching ace Randy Johnson to the Astros in 1998. He ended the season in Houston 10-1 with a 1.90 ERA and 116 strikeouts.
Todd Warshaw/Allsport/Getty Images

As the 1998 trading deadline loomed, the Seattle Mariners unloaded their pitching ace Randy Johnson, sending the lanky left hander to the Houston Astros. Johnson automatically made Houston the favorite to win the National League. The "Big Unit" went 10-1 with a microscopic 1.90 ERA and 116 strikeouts in 84.1 innings. As a result, the Astros topped the Central Division, ultimately losing to the San Diego Padres in the National League Division Series [source: Bleacher Report].

The Astros had given up several minor league prospects for Johnson, including pitchers Freddy Garcia, John Halama and shortstop Carlos Guillen. Although not the "worst" trade in history, Garcia, Halama and Guillen helped Seattle win 116 games in 2001. Garcia tallied an 18-5 record and emerged as the new Mariner ace [source: Bleacher Report].