by Theresa Waldron
Prev NEXT
10 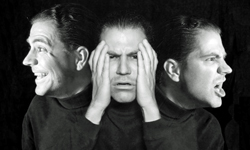 On TV, it's not so uncommon to find someone who has dissociative personality disorder. In real life, it's very rare.
Hemera/Thinkstock

TV dramas have no shortage of cases of what used to be called multiple personality disorder. Now called dissociative identity disorder (DID) by experts, this condition is related to severe trauma experienced during early childhood. It causes the person to have two or more different identities. A patient may also have forgotten whom he or she really is. In the Showtime series, "United States of Tara," the main character has alternate personalities. One is a 1950s housewife named Alice. Another is a Vietnam veteran named Buck (who wreaks havoc on "his" marriage when he has an affair).

How common is this malady? Not very. Experts estimate that between 0.1 percent and 1 percent of the general population has DID [source: WebMD]. In fact, some speculate that a recent upswing in the number of diagnoses of DID may be spurred on by increased attention in fiction and the news media [source: Lilienfeld, et al.]