Improve Your Next Water Balloon Fight (4-1) 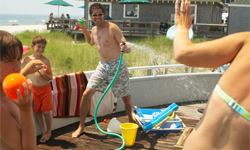 If it's a full-fledged water battle, don't limit yourself to just balloons.
Christopher Robbins/Photodisc/Thinkstock

Create the perfect centerpiece for your water balloon battle with a balloon-filled Slip'N Slide setup. Watch guests' eyes pop when they arrive in your backyard to see a trail of colorful water balloons stretched out along the length of the slide. Students at the University of Kentucky came up with this idea on their way to a Guinness World Record for largest water balloon fight [source: Guinness World Records]. The Slip'N Slide can simply serve as a holding place for the balloons while the fight takes place, or you can incorporate the slide into the fun.

Have guests shoot down the slide, and see who can pop the most balloons on their way. You can also have guests try and dodge balloons as they slide -- use food coloring to dye the water in the balloons so you can see who lands the most shots. The store-bought Slip'N Slide works well for this purpose, or you can make your own with some plastic sheets and a bit of baby shampoo for extra speed [source: BobVila.com].

Water balloon fights are fun, but if you're really good at dodging balloons, you'll never actually get very wet. This is good strategy for winning the war and showing off your speed, but can leave you sweating on a hot summer day. Add a sprinkler to the mix to provide an ideal place to cool off while planning your next move or avoiding balloons lobbed by the other team. Sprinklers also give young children who might not want to get smacked with a water balloon the chance to join in the fun. Make your own sprinkler using a large plastic soda bottle with holes poked in it, or splurge on a store-bought version that oscillates or rotates.

Nothing's worse than running out of water in the middle of an epic balloon battle. While balloons and water guns only hold so much H2O, water cannons connect to your hose to provide an endless stream of liquid ammo. Just like those water cannons found at water parks, backyard water cannons typically come with tripods to hold them steady as you take aim. Choose from single and double-barreled units for extra wow factor, or stick to models designed like simple pumps if you don't like the look of toy guns. Like slingshots or catapults, water cannons can help you fend off attackers in a splash-filled game of capture the flag -- as long as no one secretly kinks the hose!

Tying dozens or hundreds of water balloons can really take a toll on your fingers -- and it's often too difficult for kids, leaving grown-ups stuck doing all the prep work. Self-sealing water balloons like Zorbz take the pain out of water balloon fights; sure, you still have to fill each one individually, but if you pull up on the neck of the balloon as you release it from the nozzle, it seals itself, eliminating the need for tying tiny knots [source: Kulshrestha]. This technology not only leaves more time for fun, but also allows kids to play more independently, without the need for help from the adults. Best of all, these self-sealing balloons are biodegradable, so you're not harming the environment if you miss a few pieces during cleanup.

Author's Note: 10 Toys to Improve Your Next Water Balloon Fight

I've had the privilege of spending the past five summers as a summer camp director, coming up with crazy ideas to entertain 100-plus kids. While kids of all ages love water balloons, I can still remember the work involved in filling 1,000-plus balloons every time we wanted to wage a balloon battle. Not only is there a ton of time involved, but tying all those knots does a number on your fingers; it's no surprise that I had to bribe the counselors with Popsicles to get them excited for water days. With that being said, I'm more than a little excited to learn about the Bunch O Balloons and self-sealing Zorbz balloons mentioned in this article. My hat goes off to their inventors, who should be raking it in from water-balloon fanatics everywhere.