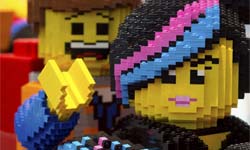 Who would have guessed that simple Lego building blocks could inspire blockbuster video games and movies?
Timm Schamberger/Getty Images

Toys have always followed popular television shows and movies -- from the countless Mickey Mouse dolls on the market to the explosive sales of "Frozen" merchandise following the 2013 Disney blockbuster film. In 2010, Mattel flipped the toy merchandising concept on its head when it decided to develop a line of toys first, then come up with a TV series to help spur sales [source: Zimmerman]. Despite a lack of existing movies or series, Monster High dolls -- a cross between Bratz and classic movie monsters -- became the most in-demand toy for Christmas 2010. While the company took a huge risk investing in the toys before the brand was well known, the risk paid off in more than $500 million in annual sales by 2013 [source: Fox News]. A handful of television specials and online webisodes helped transform the "Monster High" name -- and toys -- into one of the biggest franchises in the toy industry just a few years after it was introduced.

Transformers were a relatively unknown toy before Hasbro bought the rights to the robot line in 1984. When the company brought Transformers to the U.S., it also launched a line a comic books and an animated TV series to help promote the brand. The series was a smash hit, running through 1987, and helping to make these "robots in disguise" one of the most popular toys of the '80s. The franchise enjoyed a rebirth of sorts in 2007, with the release of a Michael Bay-directed feature film. That same year, sales of the Transformers toy line soared to $482 million due to the success of the film [source: Andrejczak] A series of sequels followed, all with its own line of merchandise. The fourth movie in the franchise, "Transformers: Age of Extinction," was the first film of 2014 to earn more than $1 billion at the global box office; not bad for a simpl, 30-year old toy [source: Lang].

The Barbie doll came in just one design when she was first released in 1959 -- a "teenage fashion model" sporting a simple black and white bikini. Despite the doll's simplicity, she was smartly managed, with the Barbie name and image licensed to more than 100 companies by the 1960s [source: Rogers]. At just over 50 years after she was introduced, Barbie has grown to become one of the largest toy franchises in the world, with product licenses in more than 45 different categories of consumer products, from toys, clothes video games, branded stores and so much more [source: Barbie Media]. Despite stiff competition, Barbie remains the No. 1 doll brand in the world, with one sold every three seconds somewhere around the globe [source: Barbie Media]. By 2014, the Barbie brand was pulling in an impressive $3 billion a year, and the company was in talks with Sony to produce its first live-action theatrical release [source: Fleming].

Ole Kirk Christiansen was a simple carpenter when he invested in a plastic injection kit during the 1940s. No one could have guessed that his company Lego would become one of the biggest toy makers on the planet in just over half a century. Despite a bump in the road during the '90s when the company faced down bankruptcy, Lego now holds rank with Mattel and Hasbro at the top of the toy industry chain. The company enjoyed $4.6 billion in toy sales in 2013, but the success didn't end there [source: Gustafsson]. A 2014 animated film grossed $69 million its opening weekend, and millions of families travel to half a dozen Lego theme parks each year to enjoy attractions inspired by the simple plastic building blocks [source: Feloni].

When I first started brainstorming for this article, I was thinking along the lines of toys like the pet rock, which earned its inventor millions in the mid-70s. Once I got further along in my research, I realized that I really couldn't ignore these huge toy-based franchised in favor of smaller and lesser-known brands. If you'd like to learn more about these smaller toy franchises that are ready to hit the big-time, check out Rainbow Loom and Bannor Toys, just two of many small, independent toy makers poised to make it big in the tough world of toys. Hopefully they, and others like them, are the million-dollar franchises of the future.