by Chris Obenschain
Prev NEXT
3 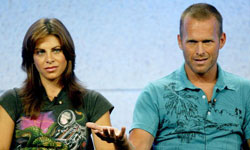 Fighting the battle of the bulge might not sound that frightening, but during the eighth season premiere of "The Biggest Loser," the usually uplifting show got supersized scary.

For the first challenge, contestants are asked to race the final mile of their journey to the ranch where they'll be living. This wouldn't be much of a test for contestants even a few weeks into the program, but for two new recruits, it's downright dangerous.

One woman collapses 100 feet (30 meters) before the finish line and has to crawl on her hands and knees to the goal. After crossing, she becomes completely unresponsive and has to be airlifted via helicopter to a nearby hospital. Another contestant, an older man, has health-related complications after the race and is strongly advised by the show's medical staff to go the hospital, which he does. Both contestants eventually return to "The Biggest Loser," but their ordeals add a somber note to the tone of the show.