by Chris Obenschain
Prev NEXT
6 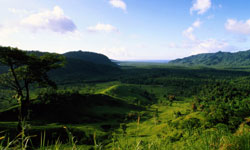 The lush island of Samoa doesn't look too frightening, but we've got a story that suggests otherwise.
Andrew Drake/Getty Images

As any "Survivor" fan can tell you, the show's not a competition for weak-willed players (or viewers). There have been several medical evacuations in past seasons, but the collapse and subsequent evacuation of Russell Swan in "Survivor: Samoa" was perhaps the most frightening moment in the show's history.

Swan's troubles begin during a team challenge. He starts wobbling while standing in place, and just as it becomes obvious that something is wrong, he passes out. Medical personnel rush in and report that his blood pressure is extremely low. After several minutes of resting, his situation doesn't improve. But it's not until he tries sitting up that things get really scary.

While the emergency monitoring equipment screeches warning sirens, Swan's eyes turn glassy and lose focus, and he becomes completely unresponsive. The situation lasts only a few seconds, but it's clear that something is seriously wrong with him. Swan is evacuated off the island.

After leaving the show, Swan makes a full recovery, but for a few terrifying moments, his fate was uncertain. That's about as scary as reality TV can get.