by Josh Briggs
Prev NEXT
6 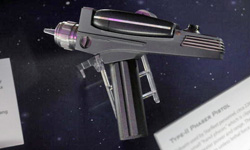 Seen on Oct. 10, 2009, this replica phaser was on display at "Star Trek -- The Exhibition" in Los Angeles.
Michael Tullberg/Getty Images Entertainment

"Set phasers to stun" -- another oft-heard command given to the Enterprise crew. The crew often relied on the stun setting of their fictitious weapon of choice known as a phaser. Armed with a phaser, Kirk and his colleagues had the ability to kill or more desirably, stun their adversaries and render them incapacitated.

Actually, stun guns have been around for some time. In fact, electricity has been used for punishment and to control livestock as far back as the 1880s. But it wasn't until 1969 when a guy named Jack Cover invented the first Taser that the stun gun was most realized. The Taser fails to kill like the phaser did, yet, it packs enough of an electrical punch to render its victim disorientated, if not completely incapacitated.

Unlike the phaser, the Taser and other stun guns must come in physical contact with the target in order to have any effect. Tasers take care of this by projecting two electrodes, connected by wires, which attach to the target's skin. Once in contact, the handheld unit transfers electricity to the target, thus having the stun effect. Stun guns with stationary electrical contact probes are somewhat less effective because while they have a similar effect on the target, you have to be much closer (within arm's length) in order to zap your target.

Something more along the lines of the phaser may be in development. Applied Energetic has developed Laser Guided Energy and Laser Induced Plasma Energy technologies that are said to transmit high-voltage bursts of energy to a target [source: Applied Energetics]. In other words, these pulses of energy would stun the target and limit collateral damage. So a true phaser may soon be a reality.