by Josh Briggs
Prev NEXT
8 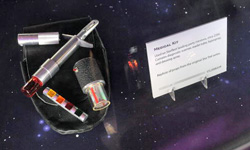 No Star Trek medical kit, like this one on display at "Star Trek -- The Exhibition" in Los Angeles on Oct. 10, 2009, should be without a hypospray.
Michael Tullberg/Getty Images Entertainment

The creative team behind "Star Trek" found spiffy ways to spice up some activities we endure on a day-to-day basis. Take medical treatment, for example: Not many people enjoy getting a flu shot, and in "Star Trek," inoculating patients was one of Dr. Leonard "Bones" McCoy's primary duties. It seemed not an episode went by that Bones wasn't giving someone a shot of some sort of space vaccine. But what was more fascinating was the contraption he used.

Hypospray is a form of hypodermic injection of medication. A hypospray injection is forced under the skin (a subcutaneous injection) with high air pressure. The air pressure shoots the liquid vaccine deep enough into the skin that no needle is required. The real-world application is known as a jet injector.

Jet injectors have been in use for many years. In fact, the technology predates "Star Trek." Jet injectors were originally designed to be used in mass vaccinations. Jet injecting is safer (no needles to pass along infectious disease) and faster in administering vaccines. Similar in appearance to an automotive paint gun, jet injection systems can use a larger container for the vaccine, thus allowing medical personnel to inoculate more people quicker.