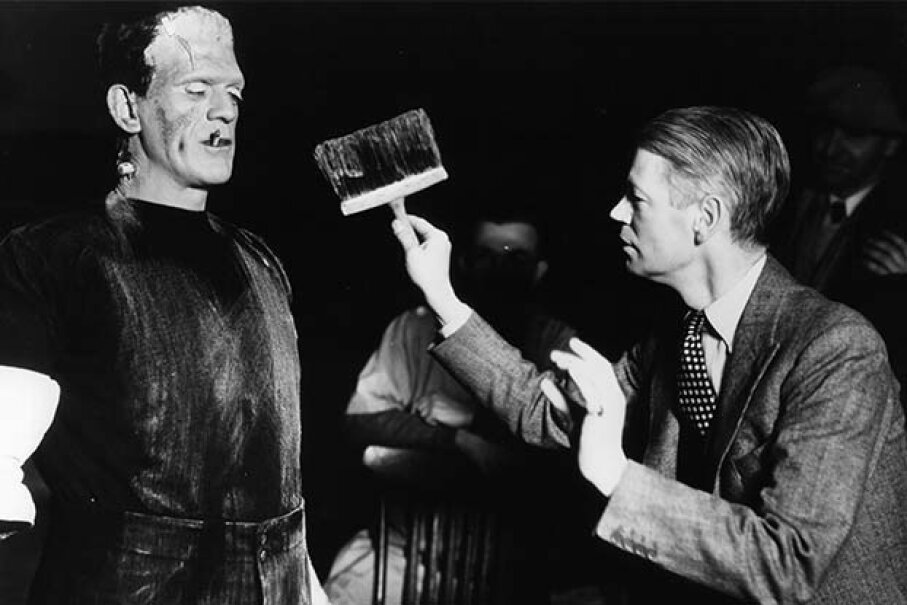 Boris Karloff (with cigarette) is dirtied by director James Whale in between scenes from the 1931 film 'Frankenstein.' See our creature effects image gallery. Universal/Getty Images

When we think of our all-time favorite movies, we often marvel at the way that the stars seem so utterly believable in their roles — and how they manage to transform themselves at times into monsters, robots, supernatural beings, talking apes or other fantastic creatures.

But film is a visual medium, and even the most skillful acting is not enough by itself to sustain the illusion. That's why Hollywood has long relied upon an elite cadre of makeup and special-effects artists, who use powder, paint, latex, silicone and in recent years, computers to convince us to suspend our disbelief.

As Jack Pierce, the makeup artist who turned Boris Karloff into Frankenstein's monster, once explained, "The sole reason for any makeup, and particularly a character makeup, is not to proclaim the skill of the artist or the actor, but to help tell the story" [source: TCM].

The role of makeup artists is so crucial that since 1981, the Academy of Motion Picture Arts and Sciences has awarded an Oscar statuette for best makeup (hairstyling was added in 2012) . Before that, awards were given occasionally for achievement in that category.

So without further ado, here are 10 of the most groundbreaking uses of special effects makeup to create memorable movies, presented in chronological order. 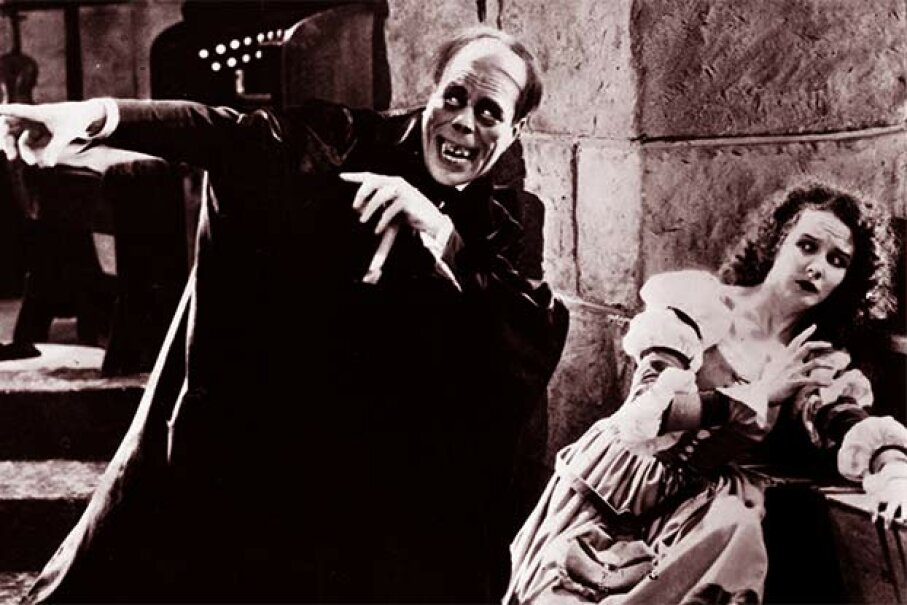 The 'Man of a Thousand Faces,' Lon Chaney, was famous for doing his own makeup -- invaluable when playing title characters in 'The Phantom of the Opera' and 'The Hunchback of Notre Dame.' Universal History Archive/UIG via Getty images

Lon Chaney, one of the greatest actors of the silent era, was famed for doing his own elaborate makeup, which he saw as the ultimate way to reveal the inner lives of his characters. "As a man's face reveals much that is in his mind and heart, I attempt to show this by the makeup I use," he once explained.

In order to portray a tormented, disfigured wraith who becomes obsessed with a beautiful young opera singer, Chaney altered his cheeks with a combination of cotton and collodion, a viscous liquid that creates the appearance of scarred skin. He also attached a strip of fish skin (a thin, translucent material) to his nose with spirit gum to create an upturned effect, and applied dark eyeliner to give himself a hollow-eyed appearance. The upturned nose was further enhanced by a wire running from the tip of his nose to under his bald cap, which often gave him nosebleeds [sources: TCM, Ebert, IMDB]. 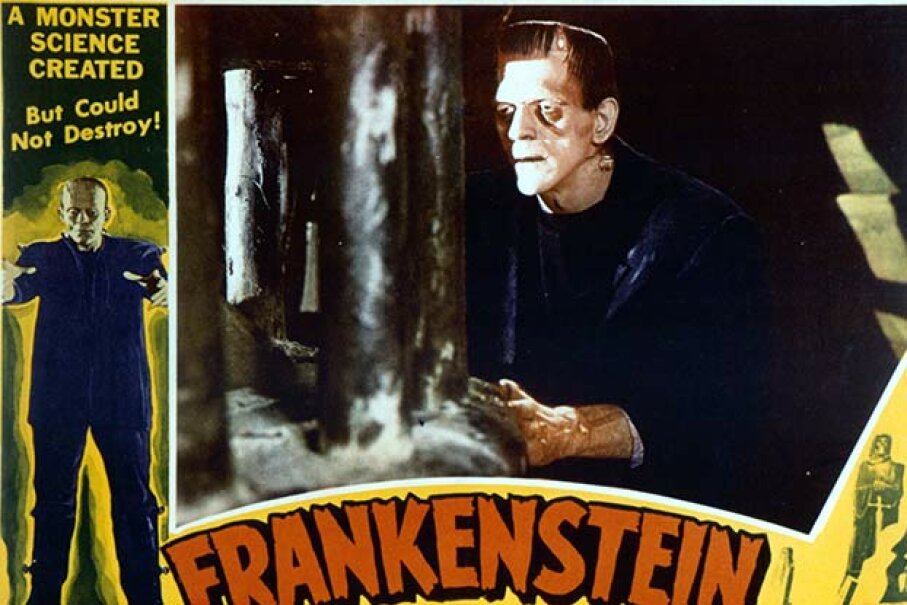 The movie poster for 'Frankenstein' shows the trademark flattened head of the monster, which was created by makeup artist Jack Pierce. Universal/Getty Images

Bela Lugosi, who had starred in the stage version of "Frankenstein," turned down a role in director James Whale's big-screen version, in part because he figured the makeup would be too involved. Instead, it was Boris Karloff who had the honor-- and discomfort -- of being transformed by makeup director Jack Pierce, who used techniques that had never before been employed. Pierce gave the monster his trademark flattened head with a rubber skullcap, cotton and spirit gum [source: TCM].

One of his most subtle but ingenious tricks was to give Karloff's complexion a greenish tint, which the black-and-white film translated into a deathly gray on the screen [sources: Hechinger, Chase]. 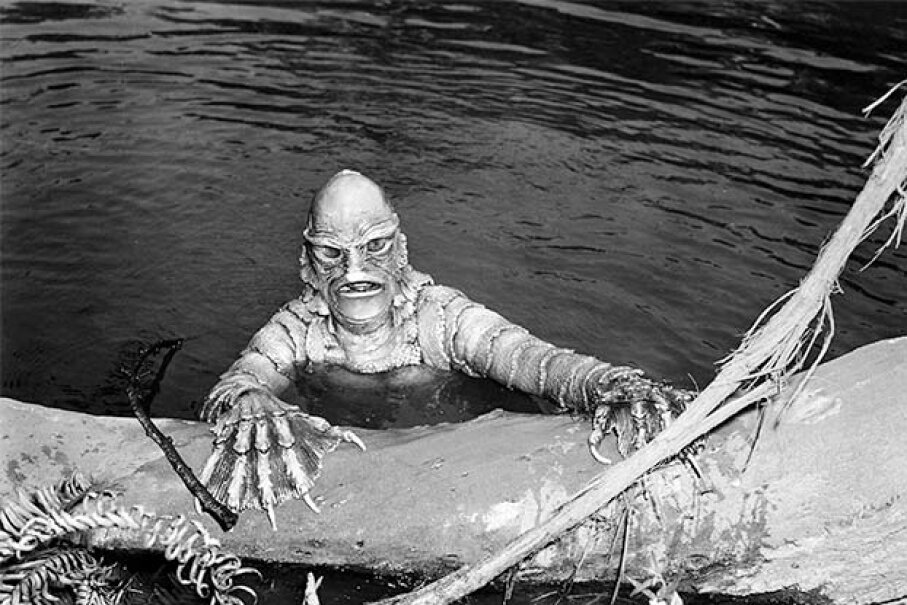 Actor and stuntman Ricou Browning did the underwater work for 'Creature From The Black Lagoon' as well as its two sequels. Silver Screen Collection/Getty Images

The Gill-Man, a sort of marine version of Bigfoot, is one of the most striking monsters in Hollywood history, in part because the physical features of lizards, frogs and eels are grafted bizarrely onto a human-like shape. The costume worn by actor Ben Chapman in the dry-land scenes was created by makeup artists Bud Westmore and Chris Mueller and designer Milicent Patrick [source: IFC].

As Chapman recalled in a 2000 interview, becoming Gill-Man required putting on a latex, one-piece body stocking, to which the artists laboriously affixed pieces of foam rubber, a process that took two to three hours. The suit did not allow his skin to breathe – not a problem when they were filming him on the back lot since he could spend the day in a pool. On soundstage shooting days, a man would hose him off until his body temperature returned to normal [source: Gourley]. 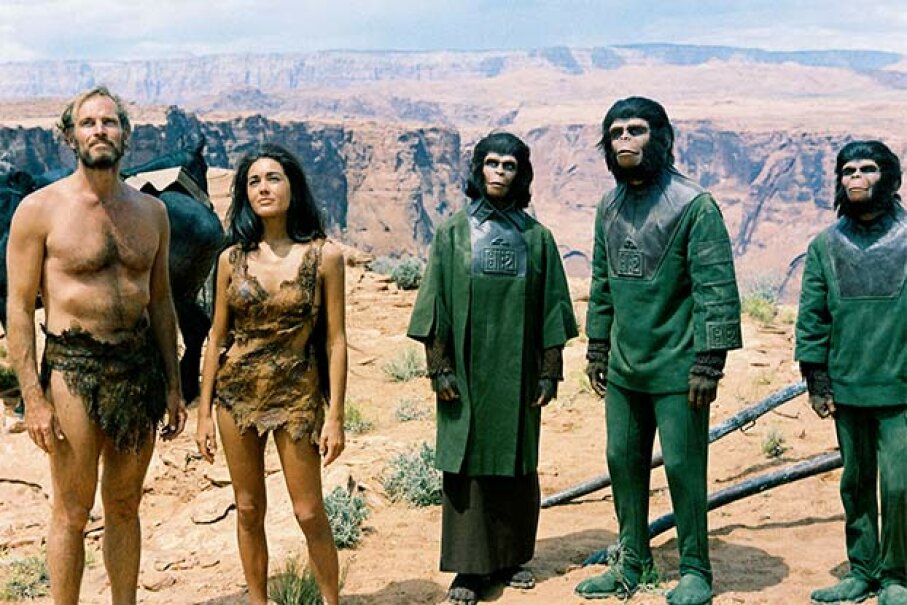 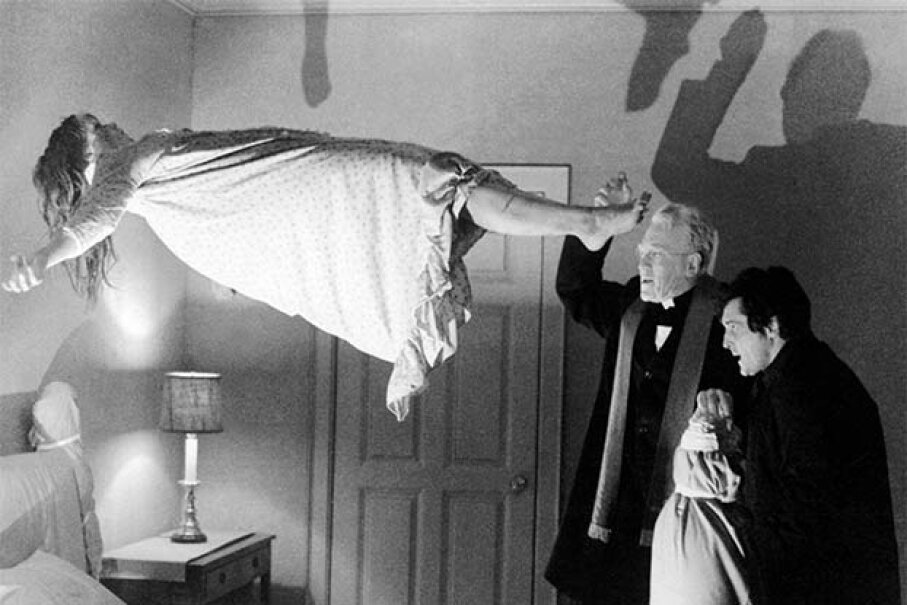 In his 45-year career, makeup wizard Dick Smith created a fake blood recipe for "Midnight Cowboy" that is still in use, aged Dustin Hoffman nearly 100 years for the film "Little Big Man," and invented special dentures to give Marlon Brando his jowly appearance in "The Godfather" [source: Grow].

But perhaps the ultimate example of Smith's virtuosity was "The Exorcist," in which he transformed cute little Linda Blair into a demonic, vomit-spewing wraith. For the famous scene in which her character's head spun completely around, Smith meticulously crafted a fiberglass version of her noggin, capable of rotating 360 degrees [source: Yardley].

One of Smith's techniques was to make his actors' masks out of several layers molded on their faces rather than out of a single piece. This strategy is now the norm in Hollywood [source: Yardley]. 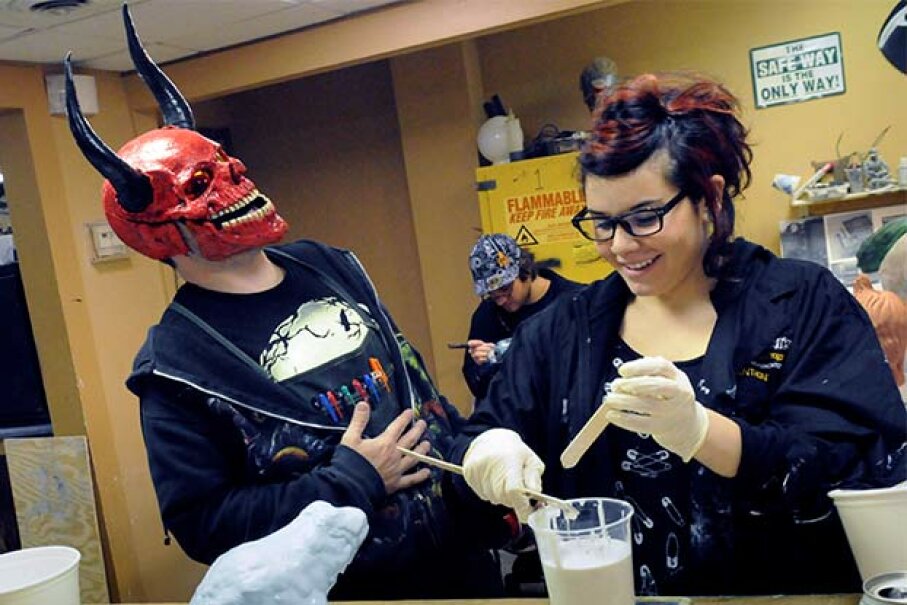 Pittsburgh-based Tom Savini, who developed his knowledge of anatomy and wounds partly through his work as a combat photographer in Vietnam, created the iconic decaying, disheveled zombies for George Romero's low-budget classics, as well as the grisly ways in which they were dispatched.

Famous for working on the cheap, Savini created all the gory special effects for "Dawn of the Dead" for just $15,000 (including materials and his assistants' wages). For one of the film's most horrific moments, he painted a soda straw silver to make it look like a screwdriver being driven into a zombie's ear. Savini went on to work his magic on another horror classic "Friday the 13th" (parts 1 and IV) [source: Konow]. 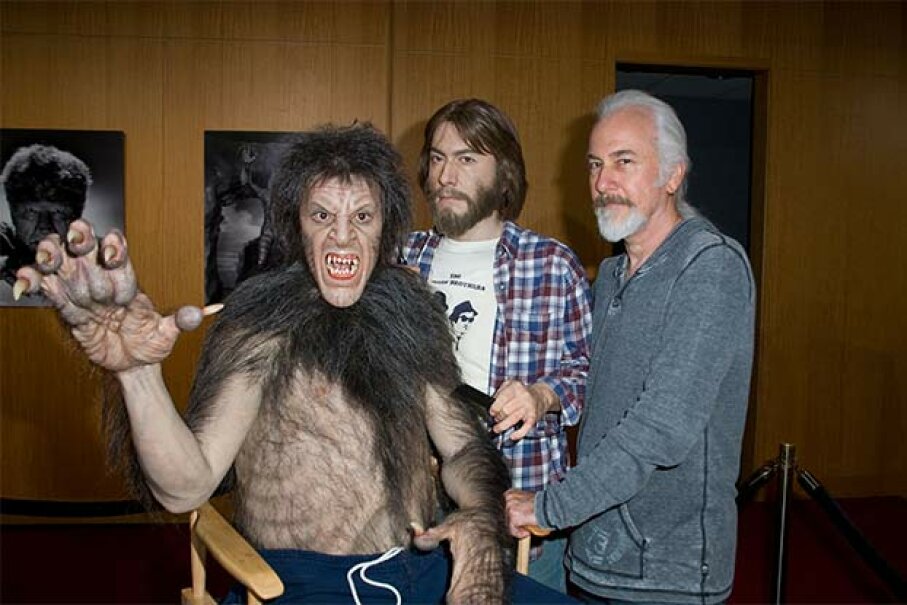 Make-up artist Rick Baker attends 'Universal's Legacy Of Horror' in 2012 and meets up with a younger version of himself working on 'An American Werewolf in London.' Vincent Sandoval/FilmMagic

"American Werewolf" fascinated audiences in part because of the extensive close-ups that showed the protagonist's agonizing transmutation, as his body sprouted fur, his hands changed into paws, and his torso shifted excruciatingly from biped human to four-legged wolf. It's even more amazing to realize that this illusion was created in the movie without today's computer-generated special effects.

Instead, makeup virtuoso Rick Baker -- who once worked as an assistant to Dick Smith -- designed a series of transitional makeup jobs for star David Naughton. Thanks to a little film editing, they made it appear that the handsome actor was morphing into a hirsute man-beast. Baker ultimately won an Oscar for his work on the horror hit that inaugurated the yearly Academy Award for achievement in makeup and hairstyling [sources: Steiger, Hollywood.com]. 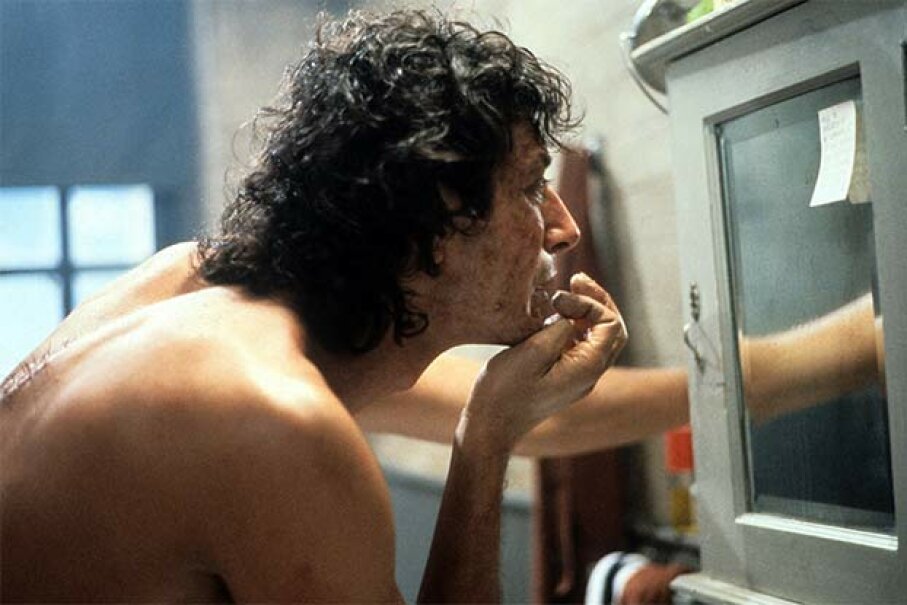 Jeff Goldblum checks out his bumpy skin in a scene from the film 'The Fly.' 20th Century-Fox/Getty Images

Goldblum reportedly had to spend up to five hours in the chair, having latex applied to his face and body to simulate the creature's bumpy epidermis, boils and misshapen musculature. The special effects used to create the human fly's gross-out affectations were often accomplished with inexpensive ordinary materials -- the goo that the creature regurgitates, for example, was a simple mixture of honey, raw eggs and milk [sources: Hollywood.com, Burnette]. 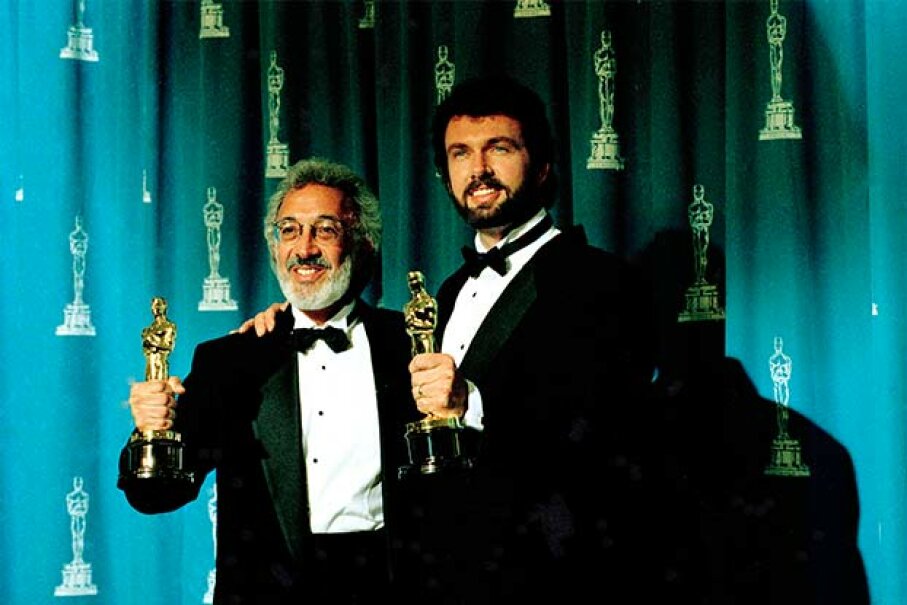 More than two decades after "Terminator 2" was made, the shape-shifting villainous android assassin and the horrific carnage that he wreaked in "Terminator 2" look so state-of-the-art that it's easy to assume they were fashioned entirely on a computer screen. But while computers were used on the movie, the most startling effects were actually created through the clever use of makeup, models and prosthetics created by the legendary Stan Winston.

One of the most spectacular sequences -- in which the T-1000 repeatedly reforms after having its head and body blown apart by shotgun blasts -- was accomplished by building a fiberglass replica of actor Robert Patrick's head, which sprang open with the pulling of a pin [sources: Welch, Stan Winston School of Character Arts]. 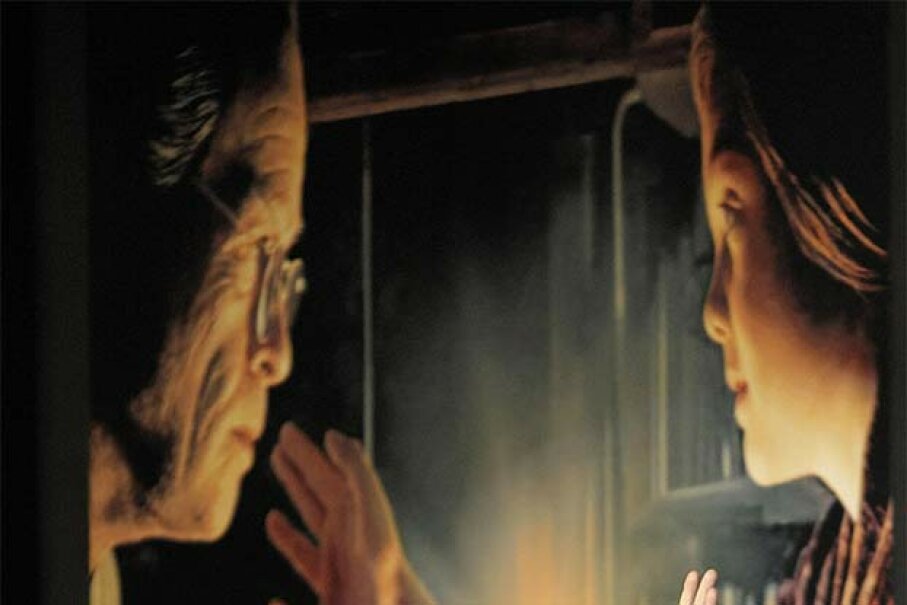 The movie poster for 'Benjamin Button' shows Button at left as a very old man. In the film this was generated completely by computers. TOSHIFUMI KITAMURA/AFP/Getty Images

Over the past couple of decades, increasingly sophisticated computer-generated special effects have become a staple of multiplex blockbusters. One of the most extensive uses of the technology was in 2007's "Benjamin Button," a magic realism story of a man who ages in reverse. Special effects supervisor Eric Barba and his team spent several years creating an elaborate motion-capture system that used 28 cameras and scores of sensors to track the subtle movements of actor Brad Pitt's face in 3-D space, so that they would be replicated in several animated elderly versions of him.

The effect was so convincing that for the first 52 minutes of the film, the Benjamin Button character's head that viewers see is entirely computer-generated, with "zero real Brad," as writer, filmmaker and visual-effects expert Lee Stranahan noted in a Huffington Post article. This CG head was used along with various "body actors" to portray Button in his elderly years [source: Seymour]. 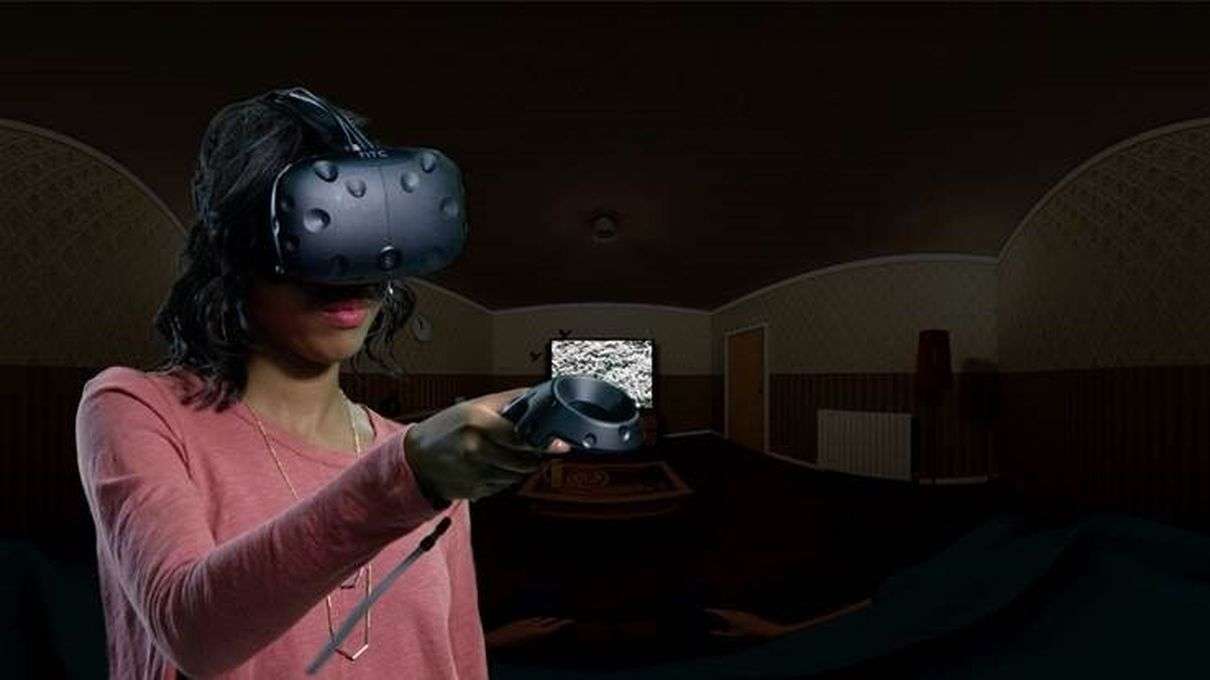 Virtual reality horror movies could be some of the scariest entertainment we humans have ever thought of. Learn more at HowStuffWorks Now.

When I was a young reporter in Pittsburgh in the early 1980s, I once had the chance to interview makeup and special-effects virtuoso Tom Savini. It was surprising to discover that the person who'd created the grotesque zombies from George Romero's "Dead" movies and Jason from "Friday the 13th" actually lived within walking distance of my apartment, in a simple row house in a working-class Italian neighborhood that he shared with his elderly father. For someone who dreamed up such grisly mayhem on the screen, Savini turned out to be a pleasant, soft-spoken guy who spoke reverently of other makeup and special-effects masters' work -- I recall that he was impressed, for example, with the animatronic apes in the 1984 film "Greystoke."