by Josh Clark
Prev NEXT
2 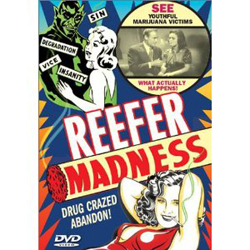 Weighing in at a trim 66 minutes, it's surprising how over-the-top "Reefer Madness" still manages to be. The 1936 film, with the alternate, original title of "Tell Your Children," is a noteworthy exploitation film for the impact it had on drug policy in the United States and public hysteria toward drug use.

The film is a story that a principal recounts to a group of parents at a PTA meeting. After being turned on to marijuana by a local couple who sell the drug, the lives of several teenagers and the pot dealers are decidedly ruined. One boy is killed, another grows addicted to the drug and becomes a fiend. One of the dealers frames another teen for murder and is driven to insanity through a combination of guilt and pot consumption.

"Reefer Madness" has also had a tremendous influence on the drug culture. The film's director (Dwain Esper, who also made other 1930s exploitation films, "Sex Madness" and "Psychotic Connections") is credited with taking a hum-drum propaganda film and turning it into a parody of itself. The anti-drug propaganda film has, contradictorily, become a cult favorite among people who use drugs.