by Josh Clark
Prev NEXT
3

Ilsa: She Wolf of the SS 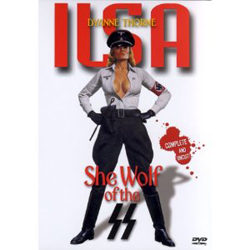 Isla: She Wolf of the SS
Courtesy Amazon.com

It's virtually impossible to go over-the-top when producing a film set around a World War II Nazi prison camp where human experimentation takes place; reality is ghastly enough. Were a film ever capable of managing such heights of tastelessness produced, it would immediately enter the annals of exploitation history. Such is the reason 1975's "llsa: She Wolf of the SS" is included in this list.

Although the film was not actually the groundbreaking piece of cinema it appears -- another film, "Love Camp 7," had forayed into sexual hijinks set in a concentration camp six years earlier -- "Ilsa" is still considered the de facto foundation for the nazisploitation subgenre that followed.

Where "Love Camp 7" is a cartoonish sex romp, "Ilsa" is grisly and X-rated for its multitudinous scenes featuring graphic and disturbing rape, torture and violence. As the title implies, Ilsa is a dominatrix-like matron of a Nazi prison camp who experiments on new means of sexual torture of both men and (naked) women alike. During her tenure, she comes across a prisoner she can't conquer -- hence the plot.

"Ilsa" became a franchise, with "Ilsa: The Tigress of Siberia" and "Ilsa: Harem-Keeper of the Oil Sheiks" joining the original.