by Jamie Page Deaton
Prev NEXT
2 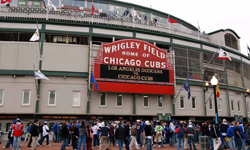 If you want to experience the kind of mass despair that only the Chicago Cubs can provide, you need to visit Wrigley Field. Wrigley is the second-oldest major league ballpark still in regular use, shoehorned into Chicago's historic Wrigleyville neighborhood, where some fans have built seats on their roofs to watch games.

Wrigley Field was built in 1914, which seems old until you consider that the Cubs haven't cinched a World Series title since 1908. Still, Cubs fans pack Wrigley, especially the outfield bleachers, where throwing back homerun balls hit by the visiting team is a tradition.

Though it doesn't have some of the attractions (or distractions) of more modern parks, Wrigley Field has history, and taking in a game here is about enjoying the game in a place where its been played for almost 100 years. For the best visit, come a bit later in the season, after the ivy has a chance to grow in on the outfield walls. Come in April and you'll miss it. Plus, Chicago is still pretty damn cold in April.