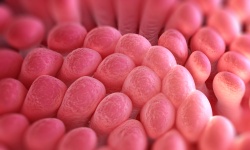 Would you know what these things are right off the bat? It's a close-up of stomach villi!
Science Picture Co./Getty Images

What is that? A cavern? A Martian valley? A water slide? Nope, it's a video of your digestive system. During half-hour episodes of the Science Channel's 2013 series "What Is That?" viewers are shown close-up images and unique perspectives of objects and substances from the natural world. Each show presents nine different videos, and the audience tries to guess what they're seeing. Recognition is not easy, so clues pop up periodically. If the digestive system appears foreign to you, maybe you'll solve the mystery with the clues "Can have butterflies" and "Hydrochloric acid on walls."

Biological elements are common, such as the belly of a whale and a human heart. You also travel to the outside world for a personal view of a sewer system or a cozy shot of a pizza baking in an oven. But seriously, how intimate do you want to get with your stomach? How close is too close?

Part of the fun of science is watching other people do really stupid things. At least that's the assumption of "Outrageous Acts of Science," which premiered on the Science Channel during the summer of 2014. The show offers Internet clips of people doing amazing, dangerous, ingenious, thrilling or ridiculous things. After their survival is assured, the show's educational team explains the science behind the activities.

You'll see videos both intriguing and downright weird. Ping-pong balls floating during a zero gravity flight are amazing to watch, as is an octopus that camouflages itself. But what's up with that bicyclist riding on a treadmill? And why do those goats keep fainting when they're frightened? No animals or people are truly harmed, but viewers might bust a gut laughing.