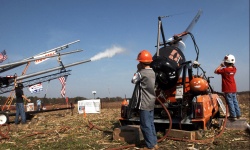 Though the title of this Animal Planet series sounds like a horror movie, it's really a behavioral science show about animals. It investigates cases of wild house pets to determine the source of the problem and provide intervention. Behavior modification techniques are prescribed for the ferocious felines. Occasionally, a follow-up episode returns to a troublemaker to check its progress.

Since 2011, the series had covered an astonishing range of rabble-rousers, including a cat that eats shoes, towels and bedspreads. Another consumes fried chicken, chips and doughnuts. One violent tabby was calmed by opera music. Then there was the cat that reacted aggressively when the owner laughed or cried. It's funny because it's not your cat.

Falling leaves. A chill in the air. Frost on the pumpkin. That pumpkin hurtling hundreds of feet through the air. How far can it go? That's the question posed by the spirited, quirky Science Channel show, "Punkin' Chunkin'." Every Thanksgiving week since 2011, the series follows a pumpkin hurling competition. Teams use their knowledge of science and technology to build contraptions such as air cannons, trebuchets, catapults and centrifugal machines in an effort to make their pumpkins fly the farthest.

Though most seasons have covered an annual contest held at Delaware's Dover International Speedway, the 2014 version sees participants flinging ordinary objects — and pumpkins — into a cornfield. Cars, televisions and pianos all sail through the air. What's the ultimate goal? According to Guinness World Records, the longest toss was 5,545.43 feet (1,690.25 meters). That 2010 Moab, Utah, record is the one to beat. Start chunkin'.