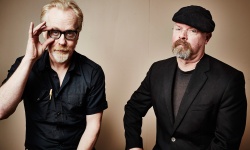 The bearded hosts of "Mythbusters," Adam Savage and Jamie Hyneman, take it upon themselves to prove certain science-related ideas right or wrong.
Maarten de Boer/Getty Images

If you're looking for scientific entertainment, you've got to consider a show with a logo of a skull and crossbones wearing lab goggles. Even the title of this British show, "Brainiac: Science Abuse," screams a comical and hazardous good time. On the Sky 1 network for six seasons, Brainiac bowed out in 2008 after delighting viewers with outlandish and quite possibly dangerous experiments. Their abusive research included whether a ringing cell phone could cause an explosion at a gas station and whether pool balls could trigger a fuse to blow up a trailer. Good, clean fun.

Though "Brainiac" isn't testing the limits of time, space and physical pain anymore, it has spun off two similar shows. Their names say it all (or too much): "Brainiac: History Abuse" and "Brainiac's Test Tube Baby." A live show also toured Great Britain, bringing science and mayhem to its fans in person.

If there's something weird that you don't understand, who you gonna call? Mythbusters! Since 2003, this Emmy-nominated show has been investigating scientific and technological questions on the Discovery Channel. The bearded hosts, Jamie and Adam, along with their crew, run energetic and fast-paced experiments to answer real-life questions.

Is it possible to beat a lie detector test? The show determined that it's possible, but not at all easy. How about the five-second rule for eating off the floor? Don't do it! Bacteria jump on after just a millisecond. Should you keep cool in a car by rolling down your windows or hitting the AC? Though experts swear by air conditioning, the Mythbusters found that gas mileage was better with windows lowered. Great. Now whom do you believe?