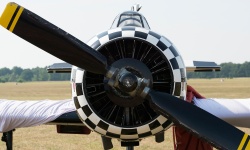 Millions have watched "Nova" to learn about everything from how biplanes work to what happens when human-raised predators are returned to their native environments.
vschlichting/iStock/Thinkstock

If an hour of science programming doesn't sound like fun, you haven't seen the PBS series "NOVA." Although topics are typically serious, they're fascinating. On this series, it's not just enough to be accurate. The production is also concerned about entertainment value, appropriate pacing, effective editing and intriguing scripts. And it works. According to PBS, "NOVA" is television's highest rated science show, and it's the network's best-rated documentary series. In the United States, 6 million people tune in weekly to learn and enjoy.

Topics span both history and science disciplines. One week you watch how biplanes evolved into World War I aircraft, and the next you learn about medieval sword making, ancient Greek computers or Egyptian chariots. If you're into biology, you can see what happens when humans return animal predators to their environments. Fans of physical science can explore the periodic table to discover which elements are the deadliest, most common and rarest. Come on: Aren't you intrigued by a substance that exists for only milliseconds?

Want to enjoy science? Listen to someone who's in love with it. On the 1980 PBS series "Cosmos: A Personal Voyage," Cornell professor Carl Sagan shared his infectious interest and enthusiasm for everything in the universe. Although the show lasted only 13 episodes, it covered everything under (and around) the sun. What do you want to know about? Whale songs? Messages on the Voyagerspacecraft? Nuclear weapons? Black holes and spacetime travel? Patterns in nature? Hieroglyphs and the Rosetta Stone?

"Cosmos" has been revived for the 21st century. Sagan's widow, Ann Druyan, worked on the original show and has partnered with Seth McFarlane (yes, of "Family Guy") to produce a new version. Hosted by popular astronomer Neil deGrasse Tyson, the new "Cosmos: A Spacetime Odyssey" premiered in 2014. Sagan may not be there, but his voice is. Recordings from the original series are interspersed within episodes.