by Robert Lamb
Prev NEXT
3

Demon Queen of the Witches 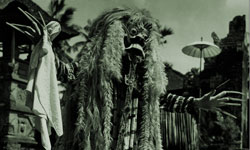 An Indonesian dancer plays the part of the evil witch Rangda in a traditional Barong dance, a representation of the battle between good and evil.
Three Lions/Getty Images

Everyone loves a good witch, but in an age of Disney princesses and sexy Halloween costumes, it's easy to forget folklore's many fabulous hags. We're talking grotesque old she-trolls with a taste for human flesh and a passion for the darkest magic.

Traditional Slavic folklore gives us the Baba Yaga, and fortunately she pops up in several films, complete with boar's teeth, flying mortar and her chicken-legged house. Yep, she's one kooky old lady. But a lesser-known hag from Balinese folklore has yet to hit the Hollywood big time.

We're talking about Rangda, the evil queen of the witches in Balinese legend. She eats children (always a great villainous pastime) and leads an entire army of evil witches against the noble spirit king Barong.

The people of Bali depict both characters in traditional dance with elaborate -- and indeed monstrous -- masks. So to Western eyes, it might be difficult to identify who's who. But as the photo illustrates, you can always spy Rangda by her long sharp claws and wild hair.

Elevator pitch: If you're game for a full-blown myth movie, the epic battle between Rangda and Barong should make for excellent fodder. But on a smaller scale, the evil witch is always involved in affairs of vengeance and black magic. Introduce some angst-ridden Westerners to a little Balinese black magic and you've got yourself a movie. Who needs Samara/Sadako when you've got Rangda?