by Robert Lamb
Prev NEXT
4 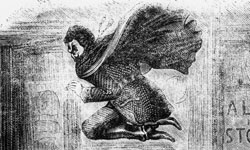 Victorian serial murder Jack the Ripper factors into scores of films, yet the mysterious Spring-Heeled Jack has received a fraction of the airtime.

Back in 19th-century London, this leaping figure was quite the media sensation. No one could shut up about his inhuman leaps from building to building and the strange, metallic gleam on each of his heels. Some accounts spoke of his dreadful iron claws and the way they tore through human flesh, while others described fiery eyes and a flame-belching mouth. Loads of people across England allegedly witnessed this demonic acrobat doing his thing.

Ah, but what was he really? If we set common sense and objective realism aside, we have to consider a host of fantastic explanations that characterized Spring-Heeled Jack as a supernatural demon, a technologically gifted killer, a time traveler, an extraterrestrial or even a Victorian superhero. You can thank author Philip Pullman for that last one.

In an age of steampunk fandom and a love of all things Victorian, old springy seems ripe for monster movie exploitation. Play into the alien technology angle, and you essentially have a period piece take on "Predator."

Of course, Spring-Heeled Jack has appeared in a few films, but never in a manner that showcased his monstrous qualities. He's always either an evil steampunk Iron Man (see the 2010 film "Sherlock Holmes," which also features giant monsters) or a vaguely supernatural serial killer -- but never the depraved devil depicted in the "Penny Dreadful" publications of the day.

Elevator pitch: Victorian London offers a whole host of real and facetious characters to spar with a cinematic Spring-Heeled Jack. Might magical nanny Mary Poppins arrive in London, fleeing the pursuit of an inhuman bounty hunter from beyond the stars? Or how about Spring-Heeled Jack as a Middle Eastern djinn (Islamic demon) brought back to England by Captain Sir Richard Francis Burton?