by Robert Lamb
Prev NEXT
5 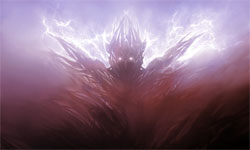 Behold the Shrike. No, we're not talking about the real-life "butcher birds" fond of impaling insects on thorns. Nope, this Shrike is a four-armed biomechanical demigod that strolls across time and space to embrace victims in a razor-sharp doom-hug. Aside from a pair of glowing, red eyes, every inch of the enigmatic creature is a honed killing blade. Fingers, face, buttocks -- you name it and the Shrike can probably use it as a can opener.

This living avatar of cutlery roams the pages of Dan Simmons' "Hyperion" saga, where it inspires both fear and worship from quivering humans. Especially in the first two novels, the Shrike slices, dices and takes the occasional break from bloodshed to imbue Jesuit priests with cruciform, life-extending parasites. To summarize: The Shrike is as deadly and mysterious as all get-out.

Elevator pitch: Look, "Hyperion" fans everywhere would love to see the mind-blowing space opera explode on the big screen, but it seems we're perpetually years away from that happening. In the meantime, why not unleash the Shrike on a 1980s summer camp for nymphomaniac teenagers? Sure, we'd be cheating ourselves out of Simmons' deeply philosophic and literate vision of humanity's far-flung future amid the stars, but at least we'd get to see the Shrike in action.