by Robert Lamb
Prev NEXT
6 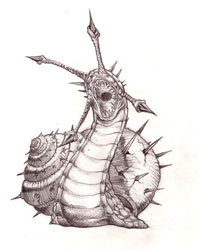 When it comes to French monsters, the Beast of Gévaudan tends to hog all the attention. After all, the lupine flesh eater scored with critics and audiences alike in 2001's "Brotherhood of the Wolf." But there's another worthy horror lurking in the country's folklore, and it turns the French love of hot, buttered snails entirely on its head.

Imagine an enormous, serpentine slug creature. Its repugnant nether regions coil within an enormous shell, while the other end erupts in a cluster of slime-dripping tentacles and the vilest, inhuman mouth you can possibly imagine.

It's everything that's horrible about the common garden snail, multiplied by a thousand.

According to legend, the creature thrives in the caverns of southern France, but regularly sends its tentacles up to the surface to snare unsuspecting humans and drag them down into the dark of its cave and belly.

The creature goes by the name Lou Carcolh, and it combines pre-Lovecraftian, tentacle-laden madness with a distinctly French culinary fascination for garlicky gastropods.

Elevator pitch: When hikers in the south of France go missing, the French Government Tourist Office sends a seasoned monster hunter (presumably played by Jean Reno) in to follow the trail of slime. Will he find the sluggish horror before it kills again? Will he slay it with a custom escargot fork, and which wine will he wash it down with?