by Robert Lamb
Prev NEXT
7 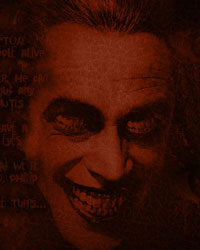 That's it. Look deep into the Corinthian's eyes, where in absence of traditional sight organs we find ravenous, saw-toothed mouths. Of course, it tends to cover these horrifying peepers up with a pair of stylish sunglasses, only to whip them off when it's time to terrify another victim.

Its preferred method of execution? Generally the monster goes straight for the eyes, plucking out the tasty morsels and feeding them to its own ravenous sockets. Not only are these meals terrifyingly delicious, they allow the Corinthian to access its victims' memories and "see" through their eyes.

As related in Neil Gaiman's comic book series "The Sandman," the Corinthian is a creation of the powerful Lord of Dreams. Intended as the nightmare embodiment of humanity's dark side, the monster eventually goes rogue and abandons the dream world altogether. It roams about, attending serial killer conventions and gobbling up eyeballs like nobody's business.

Granted, the Lord of Dreams eventually hunts the Corinthian down and unmakes the monster -- but only so he can reboot the franchise with an equally frightening Corinthian 2.0. This new version sticks to the Lord of Dreams' programming a little better and even acts the hero on a few occasions, but that doesn't mean it has given up its love of eye-munching.

Elevator pitch: Eventually, Gaiman's "Sandman" saga will make its way either to the big screen or to a serialized TV show. Fans have demanded it for far too long. But in the meantime, Hollywood, how about a solo venture for the Corinthian? Consider it a prequel, in which we get to know this living nightmare's terrifying ways before his powerful creator's film debut.