by Robert Lamb
Prev NEXT
8

The Invunche's Entourage of the Grotesque 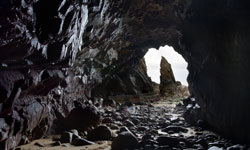 The horror genre is in sad shape these days, dominated by sulking vampires and boring torture porns. It's a problem, but the folk traditions of Chile have a problem solver -- and its name is Invunche.

Let's break down this monster's disgusting facts of life for you. Also known as the "master of the hide," an Invunche is essentially a giant, hairy blood sack with twisted limbs -- the ultimate stay-at-home vampire. It lives in caverns that are only accessible through tunnels beneath a lake. When the Invunche hungers, the creature sends out its octopus-like minion, the Trelquehuecuve, to tentacle-lasso a few young girls from the lakeshore. Then this bloated monstrosity drains every drop of their precious blood.

But that's not all! It gets even more disgusting, because the Invunche is also served by packs of furry, gray cannibals known as Chivatos. These wretched creatures feed on the drained remnants of the Invunche's blood feasts and were once children themselves, transformed into beasts by the evil warlock who oversees the entire grotesque menagerie.

How does this happen? Well, the road from abducted child to inhuman man-eater isn't a pretty one. According to folk historian Carol Rose, a warlock sews up the poor child's orifices -- or at least most of them -- and then feeds it a strict diet of goat and child flesh. In time, the toddler metamorphoses into its final form. With the right torturous, loving care, a Chivato can even become an Invunche.

It all makes for a rather horrific and sadistic cabal of blood-drinkers and man-eaters, with the vile warlock masterminding the whole show from the innermost reaches of the bleak cavern.

Elevator pitch: As a horrific commentary on corrupt business or government, an Invunche movie pretty much writes itself. Plus Wesley Snipes has to get out of prison sometime, so surely Blade is up for a case of Chilean vampirism. It wouldn't be unprecedented, as fellow comic book characters Swamp Thing and John Constantine tackled an Invunche back in the 1980s.