by Robert Lamb
Prev NEXT
9 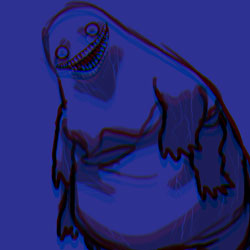 Today, you probably remember Grimace as the lovable purple dolt who once shilled McDonald's fast food to your children. What's more, you probably think we're about to pitch Grimace as a movie monster by twisting the character into something dark and morbid.

The Grimace you think of today is just a shadow of the horror unleashed on the world in the mid-1970s. That Grimace was a purple, amorphous blasphemy with scaly flesh and a vile aptitude for stealing McDonald's shakes from sugar-crazed children. Oh yeah, and he also boasted four powerful arms, like some terrifying Hindu god of gluttony.

Children were horrified. Can you blame them? So McDonald's ad executives demanded a character overhaul. The scales vanished. One set of arms hit the cutting-room floor. Finally, Grimace became a cuddly hero, and the Hamburglar took over as the franchise's core fast-food villain.

"He scared kids," recalled Roy Bergold, the former chief creative officer at McDonald's, in an article for the restaurant publication QSR. "We changed him to a soft, plush, two-armed blob of a sweetheart who only wanted McDonald's milkshakes and to hang out with Ronald."

But the purple horror is still out there, ready to crawl its way back into our nightmares.

Elevator pitch: A nightmare from the '70s emerges to terrorize a new generation of children. Bodies pile up in the streets, each with their brains sucked out through a McDonald's super-thick straw. Recognizing the handiwork of the villainous "Evil Grimace," grizzled detective Ronald McDonald (played by Harvey Keitel in full makeup) jumps on the case.