by Robert Lamb
Prev NEXT
1 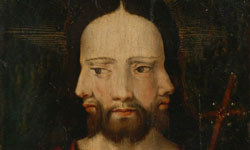 This three-faced Christ stares out at us from a 16th-century Dutch painting.
Cea/Creative Commons

All right, hold back on the hate mail for just a moment. I'm not arguing for a clumsy zombie Jesus or any other modern pop-blasphemy. And sure enough, this is easily the least monstrous monster in the list. In "Cloverfield," a giant creature destroyed New York City. In the New Testament, Jesus died on a cross and redeemed humanity -- hardly comparable acts. And yet, the concept of a monstrous Jesus goes back to the 13th and 14th centuries. What are we to make of that?

Think for a second about the nature of monstrosity. At heart, you have a convergence of ideas. The concept of a "wolf man" intrigues us because its conjoined nature of man and wolf raises questions about our own bestial nature. Monsters can make us laugh with joy or wet our pants in terror, but there's always a cognitive process involved. The monsters that stick with us tend to illuminate something about human nature or the world in which we live. That's why the word "monstrosity" originates from the Latin monstrare, which meant to show or illustrate a point.

But back to Jesus Christ. Medieval art served an important purpose in breaking down complex theological ideas into a form that the common, illiterate person could understand. So in order to explain the Holy Trinity (the concept that God, Jesus Christ and the Holy Spirit exist as a single entity), Western artists carved and painted likenesses of Jesus that either featured three merged faces or three separate heads on a single body [source: Mills].

Three-faced and three-headed Christs pop up in Western art from about the 12th century through the 19th century, but there's an even stranger Jesus monster to consider: a 14th-century bird/Jesus hybrid. Yes, the Christ figure in this depiction clearly possesses the long neck and beaked head of a bird. And why? Historians can't be certain, but "The Monstrous Middle Ages" author Robert Mills theorizes that these features stress that men should "have long necks and beaks, in order that what the heart thinks may be long before it meets the mouth."

Again, the weirdness of a monster is often just window dressing for the convergence of ideas buried inside the form.

Elevator pitch: Medieval art is rich in monstrosity, so what about a period piece in which the clergy members live side by side with the flesh-and-blood fantasies of their manuscripts? Think of it as "The Name of the Rose" meets "Destroy All Monsters." What happens when all those fantastic visions come alive in the scriptorium?

I love monsters, and it's been a thrill to write about some of the coolest cinematic creatures out there -- and I hope to keep doing it in my "Monster of the Week" blog series. Tragically, however, there are so many amazing monsters out there in folklore, literature, comics and pop culture that haven't benefited (or suffered) from a little big-screen treatment.

So, in this article, I decided to give a few of them their due. Some entries, like the Shrike and the Corinthian, have huge followings and will likely make it to Hollywood sooner or later. Others, such as the terrifying Invunche, are virtual unknowns outside of folklore circles. So I decided to feature a mixture of known and unknown monsters, as well as a few humorous elevator pitches on how they might finally make it to the screen.

For all the monster rehashes and sequels out there, fresh ideas occasionally rise to the surface. So as a fan myself, I'm crossing my fingers that several of these entries become obsolete in the near future.

In honor of the 25th 007 film, 'No Time to Die,' HowStuffWorks is celebrating 25 Bond Girls, whose looks all but gave them a license to kill.