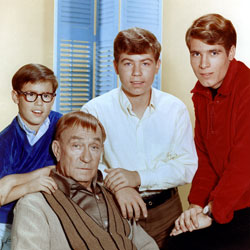 For 380 episodes and 12 seasons, Americans stepped into the world of widower Steve Douglas and -- you guessed it -- his three sons: Mike, Robbie, and Chip. When Mike left the show after the 1965 season, a younger boy named Ernie was adopted so that the title would still work! Uncle Charley moved in to help with cooking, cleaning, and homework. Fred MacMurray, who played the father, was also a star of Disney movies, so in order for him to do both, he shot all of his My Three Sons scenes for an entire season at once. The rest of the scenes were shot later and the episodes were then pieced together. But as the boys grew and their hairstyles changed, this arrangement caused problems with continuity.