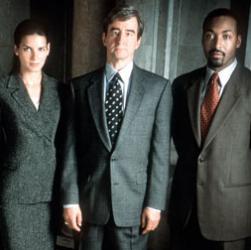 With over 400 episodes under its belt since it premiered in 1990, the key to this show's success may lie in its ever-revolving cast. None of the original actors remained on the show, and most cast members only stuck around a couple of seasons. Still, the show went on, and the New York City Police Department and District Attorney's office had their hands (and squad cars and jail cells) full as they cleaned up the streets of Manhattan on this award-winning drama. Halfway through each episode, the focus shifted from investigation to prosecution of the same case.