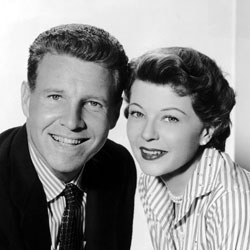 What began as a radio program in 1944 became a movie (Here Come the Nelsons) in 1952 and then a successful television program that ran for 435 episodes. In this wholesome show, the characters played themselves -- Ozzie and Harriet Nelson and their two sons, David and Ricky. Ozzie's roots were in music, so when Ricky's talent started to emerge, Ozzie wrote it into the story line, ending each show with a performance by his younger son. These weekly, televised performances helped skyrocket Ricky onto the pop charts, making him a teen idol as well as a successful recording artist.