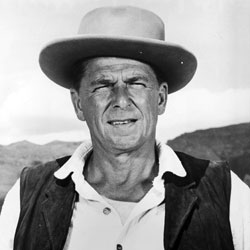 In 1952, Death Valley Days, which aired as a radio show from 1930 to 1945, evolved into a successful TV show that lasted 18 seasons. A host introduced each of the 451 episodes, which were based on actual pioneer stories that took place in southeastern California and western Nevada during the late 1800s. Future President Ronald Reagan and country singer Merle Haggard were among the hosts during the show's run.