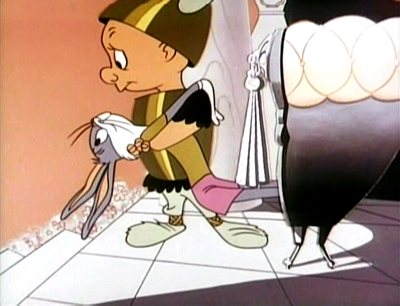 Academy Award-winning animator Chuck Jones (1912-2002) directed and created such iconic cartoon figures as Bugs Bunny, Porky Pig, Daffy Duck, Pepé Le Pew, and Roadrunner. His animated TV specials include Rikki-Tikki-Tavi and How the Grinch Stole Christmas. In the following list, compiled in 1984, Jones discussed his favorites among the cartoons he directed.

"It was a difficult cartoon to do, and I'm most proud of the fact that the difficulty and effort doesn't show in the product."

"We took 14 hours and cut it down to six minutes. We played the music straight -- we had a sixty-piece orchestra."

"A pugnacious dog is overcome with love for a kitten. It's just one of my favorites."

"This was an Archie Bunker story before its time, and we had a great cast, Bea Benaderet, Billy Bletcher, and Stan Freberg."

"Daffy has a long fight with the person drawing the cartoon. I had always wanted to do a story like that. It was a challenge, but it sure was fun."

"Naturally, this was a Buck Rogers satire. We did a lot of experimenting. We did this in 1953, before there was a Cape Canaveral -- we didn't even know what rockets were. You know, our cartoon looks just like Cape Canaveral. I'm often kidded that I'm the one who really designed Cape Canaveral."

"This won an Academy Award in 1949. The star was Pepé Le Pew, and this is one of my favorites because I admire Pepé so much. Really, I want to be just like he was in this cartoon."

"I had to include a Roadrunner picture in this list. The Roadrunner has no dialogue, so it crosses all international borders. This is my favorite Roadrunner."

"Daffy tries to sell a script to Jack Warner. We had all the characters in this one, and we really had the opportunity to play with Daffy's character. It was a lot of fun."

While you can browse through hundreds of fascinating lists at Extraordinary Lists, here are 5 lists that we feel are certain to amaze and entertain: