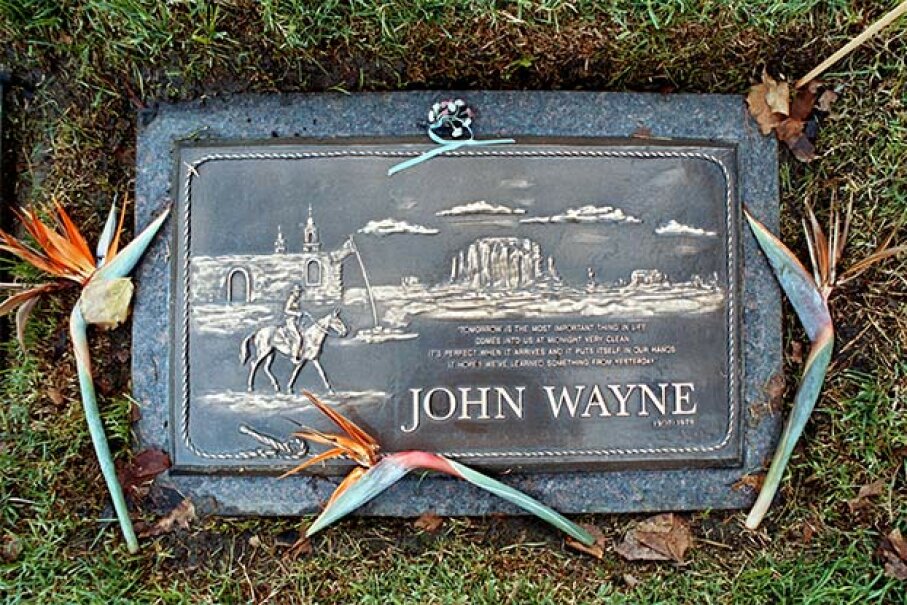 The lives of famous people nowadays are catalogued to the hilt, with every coffee break and bad hair episode documented in detail. Even in death, celeb gravesites are visited by droves of adoring fans. Most famous people opt for some sort of marker or headstone, but occasionally one (or their family) bucks the trend and selects an unmarked plot. Don't fret too much about finding your favorite celeb, though. Although many cemeteries won't disclose information, it's easy to find detailed directions online.

So what constitutes an unmarked grave? The answer is pretty straightforward. "If there's no marker, headstone or nameplate and there is someone in the grave, it qualifies as 'unmarked,'" explains Jolene Mason, general manager of Pierce Brothers Westwood Village Memorial Park, a popular resting place for modern and classic celebs, outside Los Angeles.

Historically, financial limitations and social status were factors in whether a person (even a famous one) was awarded a big fancy marker. Mass, unmarked graves were also common in times of widespread disease or war; plus older markers simply deteriorated over time or were stolen [sources: Texas Historical Commission, Washington Post]. Modern celebrity concerns are more likely related to privacy and a desire to avoid vandalism. According to Mason, others simply don't want a marker, can't decide on wording, or plan to add one down the line when a loved one passes away and joins them in the plot.

To get our list of 10 famous people in unmarked graves started, we'll look at a major musical genius who may or may not still be 100 percent in his resting spot! 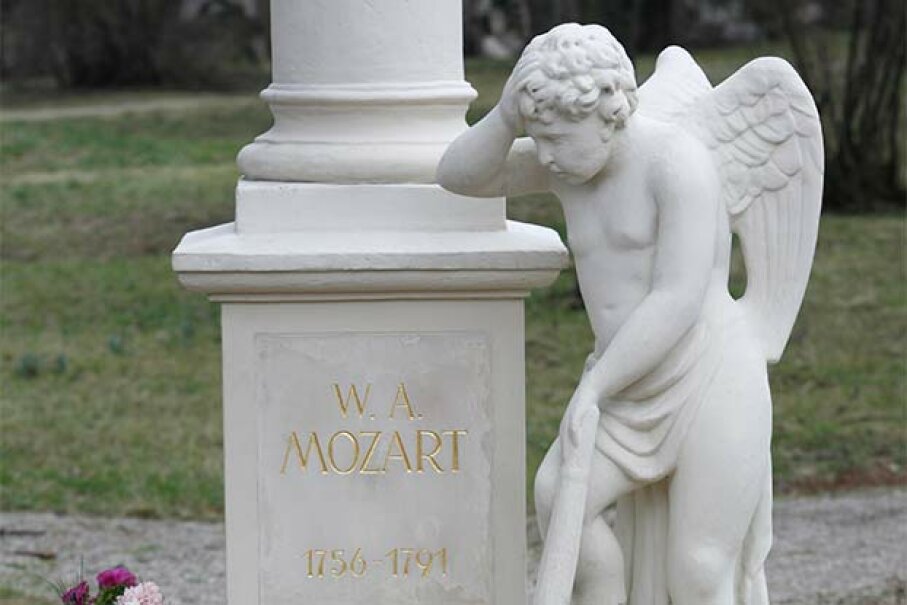 A close-up of Wolfgang Mozart's tombstone; no one is sure whether he is really underneath as he was originally buried in an unmarked grave. © Pascal Deloche /Godong/Corbis

He only lived a scant 35 years, but the famed composer continues to fascinate in death more than 250 years later. Wolfgang Amadeus Mozart, whose demise in 1791 was probably caused by rheumatic fever, was buried in an unmarked grave alongside a passel of other people in St. Marx Cemetery near Vienna. Despite his relative fame as a composer and performer, only the upper echelon of society was buried in marked graves at the time [source: Biography].

In the 1850s, a monument was built over the spot where Mozart was thought to have been buried. The monument was later moved to a space for honored musicians in another cemetery. Today, visitors can go to St. Marx and see another memorial at the alleged spot, consisting of an angel statue gazing at a broken column with Mozart's name engraved on it [source: Vienna City Administration]. 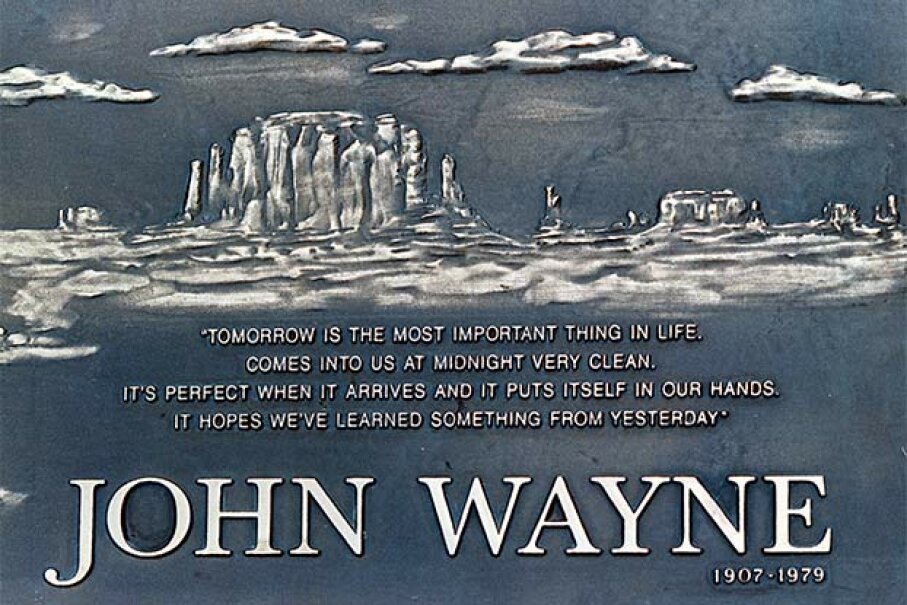 John Wayne was, is and probably always will be an iconic "man's man." His public persona was rife with rough-around-the-edges Wild West appeal. So it makes sense that he'd have a no-frills burial in keeping with his image, right? Except that's not why his family chose to place the Oscar winner in an unmarked grave. Loved ones simply wished to prevent his final resting place from becoming an over-the-top shrine, as is often the case with pop culture figures (Jim Morrison, anyone?) They did it as much out of concern for the other permanent residents of Pacific View Memorial Park in Orange County, California, as they did for the world's most famous cowboy [source: Los Angeles Times].

In 1998, nearly 20 years after he succumbed to lung cancer, an understated bronze plaque was added to the gravesite where he's buried. So if you decide to mosey on down, honor The Duke by being respectful, OK, pardner?

Next, get the scoop on the blues sensation whose headstone was bought and paid for by another singing star. 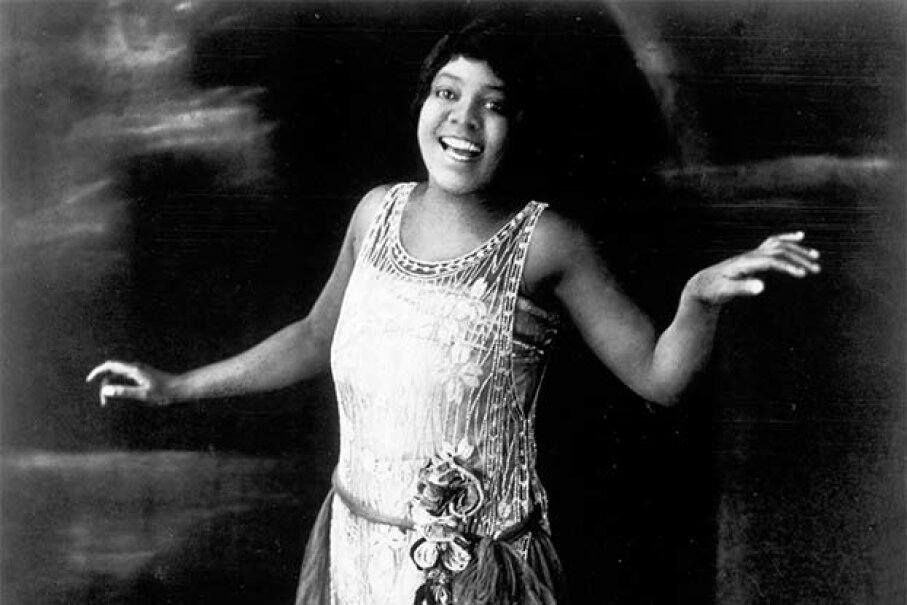 A photo of Bessie Smith singing in her heyday, in the 1920s. Gilles Petard/Redferns

Some of you may not know who famed blues singer Bessie Smith was, but Janis Joplin sure did. A prominent vaudeville blues vocalist during the early 1920s, Smith was a born entertainer who recorded with legends like Louis Armstrong and Charlie Green [source: PBS]. Her career stalled in large part due to her ongoing bout with alcoholism, but she seemed on the verge of a major comeback when she was killed in a car crash in 1937.

Decades later, she'd earn the love of another famous, but troubled female artist. Janis Joplin, one of the most important female singers of the 1960s, found Smith's brand of blues to be so inspiring that she commissioned a headstone in 1970 for the unmarked grave. Sadly, Joplin died shortly thereafter of a heroin overdose [source: History]. 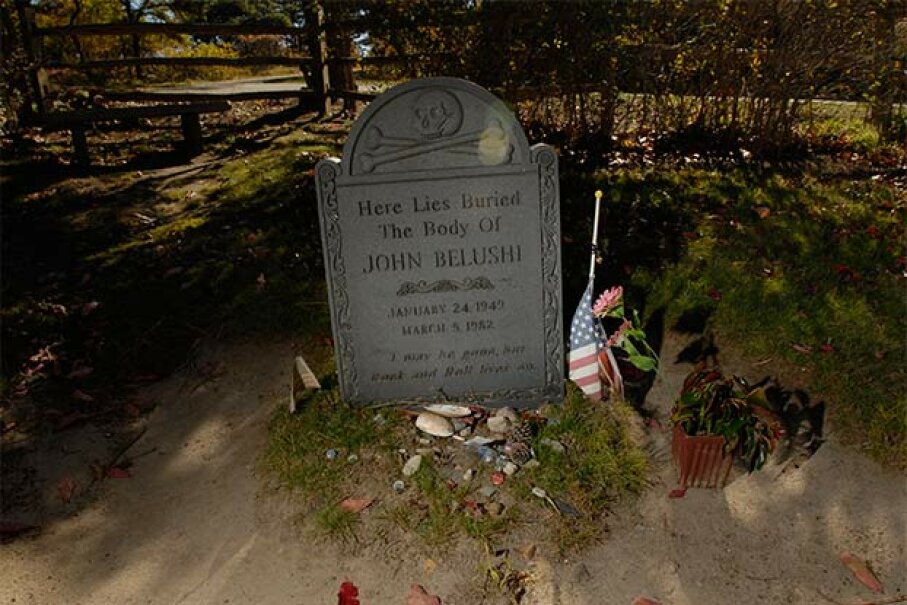 John Belushi was originally buried beneath this headstone but vandalism from zealous fans caused the family to move his body a few feet away. © Neville Elder/Corbis

Fans of the "Saturday Night Live" comedian and movie star can visit a headstone that bears John Belushi's name ... but his actual body? Only a treasured few are likely to know exactly where it lies.

Remember the craziness that John Wayne's family sought to avoid by burying him without a marker? Belushi, who died of a drug overdose in 1982, was originally interred in a marked grave in Martha's Vineyard, Mass. Unfortunately, rampant littering and shrine-decorating by adoring, but oh-so-inconsiderate fans left the site in disrepair. So his wife quietly ordered his remains moved to an undisclosed location within the same cemetery, some distance from his tombstone [source: Time]. 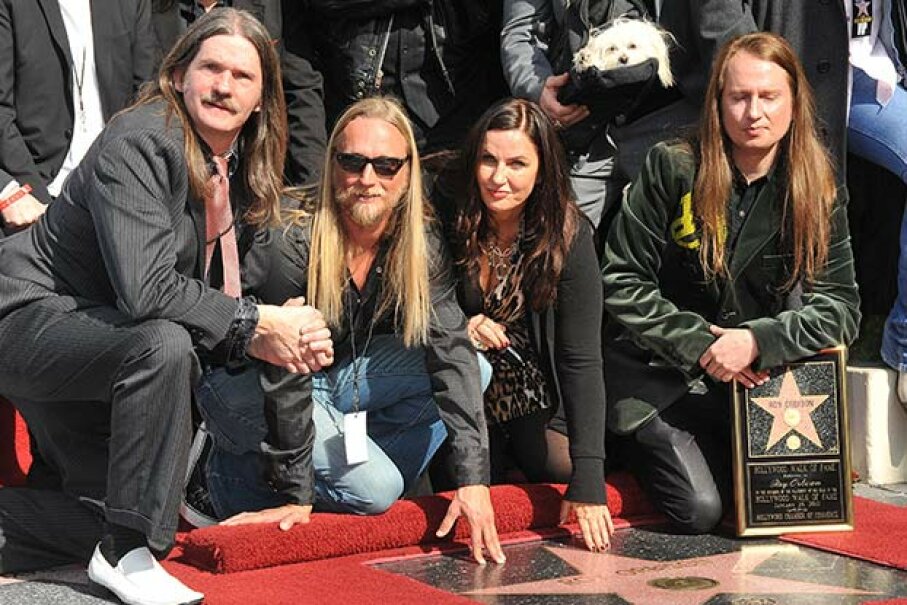 Roy Orbison's widow Barbara and sons pose at his installation into the Hollywood Walk of Fame in 2010. After more than 20 years, the family still hasn't gotten a headstone for the late singer. © Frank Trapper/Corbis

Star on the Hollywood Walk of Fame? Check. Gravestone? Not so much. The "Oh, Pretty Woman" warbler died of a heart attack in 1988, and was quickly interred in go-to celebrity burial ground, the Westwood Village Memorial Park and Mortuary. A marker identifying the rock 'n roll great's final resting place has been a much slower process, largely because the family originally planned to relocate him, but never got around to making the move. Ironically, Roy Orbison is buried in close proximity to megastars like Natalie Wood and Marilyn Monroe, who are both popular stops on the celebrity grave circuit [source: Goodman]. 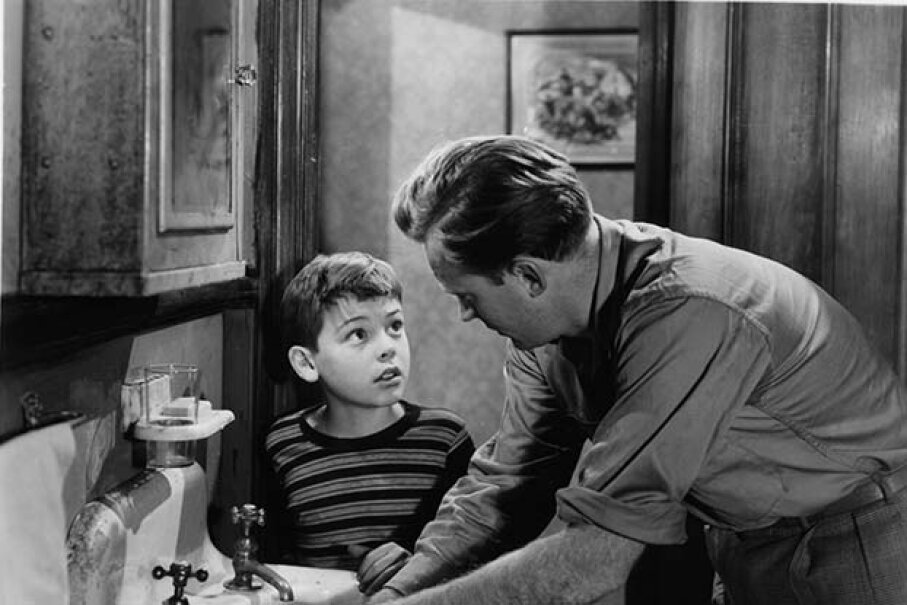 Young Bobby Driscoll looks up at Arthur Kennedy in a scene from 'The Window.' Driscoll died penniless of heart failure and was buried in a pauper's grave. RKO Radio Pictures/Getty Images)

Peter Pan is still known today as "the boy who never grew up," but the child who voiced one of Disney's most popular parts most definitely did, and went on to live a very hard life. One of Hollywood's original child actors, Bobby Driscoll voiced the part of Pan, but was also acclaimed for his roles in classics "Treasure Island" and "The Window," among others. Once puberty hit with all its skin-ruining, voice-changing glory, studios dropped him like a hot potato, and he turned instead to drugs and criminal activity [source: Des Moines Register].

He died in New York City at age 31 inside an abandoned apartment. The autopsy concluded that years of drug abuse caused catastrophic heart failure. Sadly, lack of identification forced officials to place him in an unmarked pauper's grave [source: IMDB]. His own mother, seeking his whereabouts a year later, found out he had died when police identified him using fingerprints they had collected before he was buried [source: Des Moines Register]. 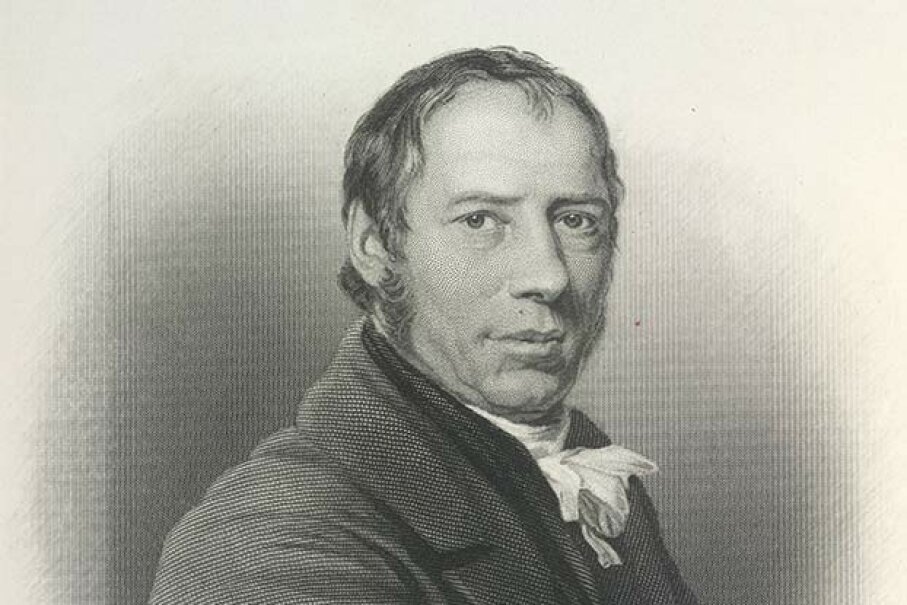 Richard Trevithick was the inventor of the steam locomotive but he failed to profit from it. The British Library/Robana via Getty Images

Whether or not you're a die-hard train enthusiast, it's pretty hard to dispute Richard Trevithick's impact the world. An accomplished mechanical engineer, Trevithick was born in Cornwall, England, in 1771. Among his many notable accomplishments, he's probably best known in transportation circles for constructing the very first steam locomotive.

Unfortunately, Trevithick's engineering skills did not translate to business, and he made many foolhardy decisions that cost him financially (although plenty of other people managed to turn a profit on his ideas). He died virtually penniless in 1833 and was subsequently placed in an unmarked grave, where he remains today [source: Encyclopaedia Britannica]. 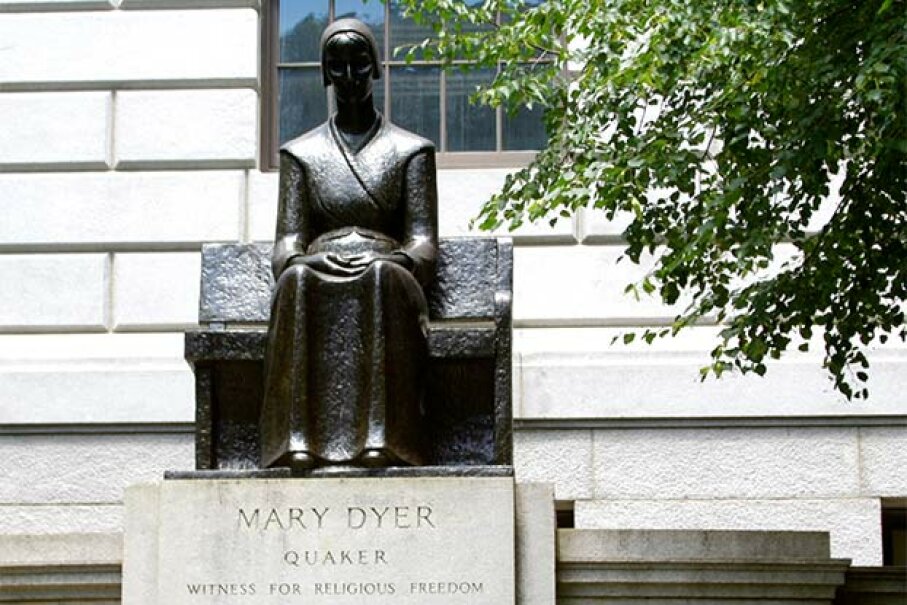 This statue of Mary Dyer sits on Boston Common, hailing her as a heroine of religious freedom. Thunderchild7/Flckr

She may not be famous in the current celebrity sense, but Mary Dyer was a rock star in the religious freedom world. Her "sin" was converting from Puritanism to Quakerism, because Quakers believed that people could hear directly from God, without needing an intermediary like a clergyman. This was a really big deal in the 1600s, as it threatened the authority of the church leaders, who governed the colony, and banned Quakers from living in Massachusetts [sources: PBS, Robinson].

Dyer went into exile in Rhode Island. However, she returned to Boston to support two friends who were imprisoned for their Quaker beliefs. All three were sentenced to death but reprieved and banished. But Dyer came back again, determined to speak out for religious freedom. She was hanged in Boston Common and buried in an unmarked plot in 1660. (Some say her body was taken to the family farm). Remorse over this unnecessary execution led to a lessening of anti-Quaker laws and eventually to the Rhode Island Royal Charter of 1663, legally granting freedom of religion. Today, a statue of Mary Dyer stands in Boston Common, where her life famously ended [sources: National Women's History Museum, Robinson]. 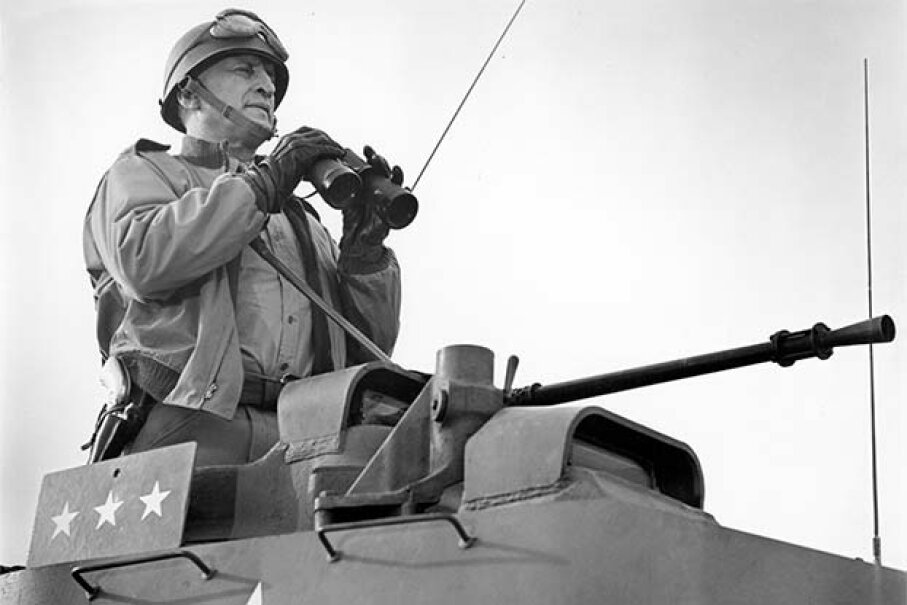 Actor George C. Scott commands the battlefield in a scene from the film 'Patton.' No one knows why his grave is unmarked. Michael Ochs Archives/Getty Images

His career was huge, respected and ultra-successful, but in death he's relatively understated. George C. Scott appeared in many acclaimed films, including "Dr. Strangelove" and "The Hustler." He's arguably best known for his portrayal of legendary Gen. George S. Patton, although he famously rejected an Academy Award thanks to his disdain for the awards process [source: BBC].

After he died in 1999 of a burst abdominal aneurysm, Scott was buried in an unmarked plot in Westwood Memorial, a stone's throw from fellow anonymous grave-dwellers Roy Orbison and Frank Zappa [source: Los Angeles Times]. 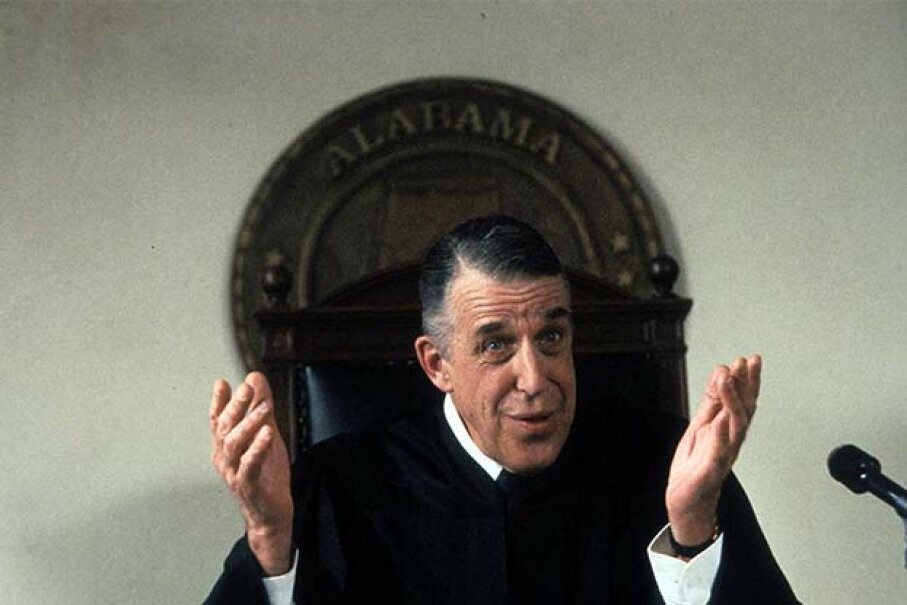 Fred Gwynne plays against type as a judge in the 1992 film 'My Cousin Vinny.' 20th Century-Fox/Getty Images

It's not clear why actor Fred Gwynne is buried in an unmarked plot, but he has occupied such a spot at Sandy Mount United Methodist Cemetery in Maryland since his death from pancreatic cancer in 1993 [source: Find A Grave].

Don't fret if you're having trouble putting his name with a face – most of us are more accustomed to his visage in full Herman Munster makeup! One of his last roles was that of the oft-exasperated judge opposite Joe Pesci in "My Cousin Vinny," but his body of work was a collection of critically acclaimed films and much-loved television shows, including "Car 54, Where Are You?" and "The Munsters." Gwynne was also a highly regarded painter, sculptor and children's book author [source: IMDB].

Celebs are people too, and deserve to have a peaceful final resting place. If they decide to make it unmarked, so be it! That said, the next time I visit Los Angeles I'll be armed with a map of marked and unmarked plots. Who can pass up a chance to pay respects to Donna Reed and Marilyn Monroe? Not this girl!