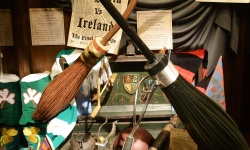 The vibrating Nimbus 2000 broomstick, which looked similar to these models, was such an embarrassment that Mattel had to pull it from the shelves of stores everywhere.
© Henning Kaiser/dpa/Corbis

Since the 1930s when studios released the Shirley Temple doll to capitalize on the fame of the young star, toy-makers have attempted to merchandise movies to the hilt in order to maximize revenue. After all, people will pay about 50 percent more for a toy linked to an entertainment property — like a movie or TV show — than they will for a non-entertainment associated toy [source: Zimmerman]. With such a premium for movie merchandise, toy-makers and movie producers are eager to wring every dime they can from hot films, even if it means releasing a few bombs along the way. Read on to learn about some of the biggest head scratchers and missteps in the billion dollar world of movie merchandising.

Poor Jar Jar Binks. With some critics complaining he was simply out of place in the "Star Wars" franchise and others arguing he was nothing more than a degrading racial stereotype, it's no surprise that Jar Jar merchandise didn't exactly fly off the shelves when "The Phantom Menace" was released in 1999 [source: Marche]. While pretty much all Jar Jar-related toys lingered on store shelves much longer than other "Star Wars" merchandise, perhaps no "Star Wars" item embarrassed the franchise more than the infamous Jar Jar Binks lollipop [source: Silverman]. The lollipop consisted of a heavily-textured candy tongue tucked between Jar Jar's jaws and mounted on a black plastic handle. To consume the candy, buyers had to slide their mouth between Jar Jar's ample teeth and suck on his red, fleshy tongue. As if the design of the lollipop wasn't mortifying and disgusting enough, many critics argued that the candy had a decidedly phallic appearance, making it inappropriate for kids regardless of the ick factor.

When "Alien" debuted in theaters in 1979, there was little question that the movie earned its R rating, thanks to gruesome death scenes and plenty of blood. Despite the fact that the movie was not exactly optimal viewing for kids, the franchise released a series of Alien-themed toys to accompany the picture and its eventual sequels, including a truly terrifying 15-inch tall alien action figure that frightened children and adults alike. After many complaints that the toy was simply too scary, Kenner shelved a planned line of action figures from the film. It wasn't until 30 years later that the "Alien" action figures finally saw the light of day, when they were released to appeal to adult collectors [source: Mattise].

The "Alien" action figures weren't the franchise's only troubling tie-in. Starting in 1986, Galoob Toys produced a number of Micro Machine sets based on the films. These tiny cars, which were aimed at children ages 4 and up, came in packages featuring such kid-friendly images as a disemboweled man and a massive alien, fangs dripping as he chased his human victim [source: RobotvsBadger.com].

It's hard to imagine a more baffling movie tie-in toy than the Transformers Play Shave Set, which was released alongside the "Transformers" movie in 2007. With most movie merchandise, there's at least a tenuous connection between the film and the product being sold; when it comes to this toy, however, it's hard to argue there's any connection between shaving and the movie or a link between shaving and robots in general [source: Gamble]. Instead, it comes across as more of a chance to simply sell toys by slapping on images of the popular franchise.

For those who argue that kids may enjoy the toy simply because it's fun to play with, regardless of the lack of tie-in to the film, keep in mind that most young boys are unlikely to get terribly excited by personal hygiene, even if that can of shave gel features a picture of Optimus Prime.

In the beloved J.K. Rowling series, Harry Potter's Nimbus 2000 broomstick makes him the hottest kid on the Quidditch pitch. Due to the prominent role that the broom — and flying broomsticks in general — played in the books and films, it's no surprise that toy versions of the Nimbus found their way into stores. In 2001, Mattel released a picture-perfect version of Harry's top-notch broom. Crafted from plastic and designed for kids, the Nimbus 2000 allowed riders to pretend they were soaring through the skies like Harry and his friends. A set of AA batteries even made the broom vibrate like the brooms in the film do when their riders hold out a hand to call the broom to action. Of course, all that vibrating raised a few eyebrows among parents and led to some truly entertaining reviews on online shopping sites [source: Time]. To quash the rising tide of protest, the vibrating Nimbus 2000 was quickly pulled from the market by 2002 and replaced with non-vibrating alternatives.

When you picture the Incredible Hulk, you likely imagine a giant, green, rage-filled monster, intent on smashing everything in his path. When "The Incredible Hulk" movie was released in 2008, it came with a PG-13 rating, but that didn't stop toy-makers from taking a stab at the juvenile toy market. To draw in very young Hulk fans, Hasbro released a soft animated Hulk figure that sang and danced to his own silly version of the Hokey Pokey — think Tickle Me Elmo, super-hero style. If the real Hulk could see himself this way, he'd likely get to smashing in a fit of embarrassed rage [source: Robinson] 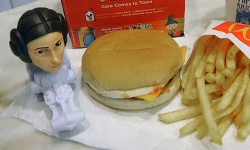 Princess Leia was one of many “Star Wars” characters that came packaged in Happy Meals as part of McDonald’s “Clone Wars” toy line.
CONFIRKAREN BLEIER/AFP/Getty Images

Imagine that you're a young "Star Wars" fan rushing downstairs on Christmas morning 1977 to tear into some wrapping paper. Thanks to a slow start at producing toys to support the "A New Hope" release, young fans of the film were more likely to end up with an empty cardboard box than an actual Luke or Leia action figure. Knowing they wouldn't have "Star Wars" toys manufactured in time for Christmas, Kenner had the ingenious idea to sell an IOU-of-sorts, so kids would have something to open on Christmas morning [source: West]. The box contained a mail-away certificate, which promised kids they'd have Luke, Leia, R2-D2 and Chewy figures by June 1978 at the latest.

While the "Star Wars" holiday IOU may seem depressing today, Kenner managed to sell a whopping 300,000 of them during the 1977 holiday season [source: Sweetwater and Neumann]. Embarrassing? Yes, but kids who held on to these boxes and never opened them or redeemed the certificate may have the last laugh, as the '77 empty box has soared in value since it disappointed kids on Christmas morning.

Let's be clear — the Teenage Mutant Ninja Turtles craze produced some truly spectacular toys starting in the late '80s, and by the early '90s, manufacturers had sold a staggering quarter of a billion turtle figures. Many of the classic characters make sense to the franchise and are much beloved by kids and collectors alike. Considering the relatively small TMNT cast and the 400-plus turtle action figures on the market, it's no surprise that more than a few missed the mark as toy-makers racked their brains for new ideas [source: Lammie].

Take for example the Bodacious Birthday line of turtles, which consisted of an utterly ridiculous looking Crazy Clown Mike and a magician-themed Raph the Magnificent. If that's not enough for you, consider the baffling line of farmer turtles, sumo wrestlers and dino-turtle hybrids or a strange series of Wild West figures, including a gap-toothed Bandito-Bashin Mike. Perhaps the weirdest of all were the pizza-tossin' turtles, which shot plastic pizza discs from their chest cavities and featured some truly crazed faces.

The "Rocky" franchise brought out a number of questionable action figures to accompany its classic movie star, including an odd wheelchair-bound Rocky and an even weirder caveman Rocky toy. Despite these small missteps, toy-makers really jumped the shark when they released The Meat action figure in 1976, which consisted of a slab of beef and a bloodstained apron. Sure, this action figure might have made more sense if it was actually packaged with Rocky, who famously punched a side of beef during a training scene in the film. Shamefully, The Meat came sans any figure at all, making it more accessory than toy and making it appear more like a desperate cash grab than an attempt at thoughtful merchandising. To be fair, the meaty marvel was roughly the size of a standard action figure, but had relatively little play value on its own, making it one of the most embarrassing movie tie-ins ever released.

With the release of the animated "Clone Wars" in 2008, McDonald's launched its first ever line of "Star Wars" toys, consisting of 18 different toys packed in special collector's meal boxes. While the concept of a McDonald's/"Star Wars" combo made sense on paper, the excitement was short-lived when the actual toys were released. Rather than sticking to the classic character designs, McDonald's went with a wacky bobble head concept, with oversized character faces jutting out of tiny vehicles [source: David]. Darth Vader looks a whole lot less intimidating when he's been reduced to a giant head wobbling above a TIE fighter, and Han Solo loses a bit of his heroic style when you see his face dwarfing the Millennium Falcon. And of course, let's not forget poor Chewy, who ends up stuffed awkwardly into an all-terrain transport vehicle. Despite the large number of incredible "Star Wars" tie-ins released since the series began, this is one line that falls flat.

1: Human Torch on an ATV

When the "Fantastic Four" film hit theaters in 2005, fans were inundated with the usual line of movie merchandise, including a series of action figures. While figures of Dr. Doom and the Invisible Woman seemed appropriate, the Human Torch figure rubbed fans the wrong way. In the film, as well as the original line of comics, the Human Torch was fully capable of flying anywhere he needed to go, yet for some inexplicable reason, his 2005 action figure came perched on an ATV. Totally unnecessary, but also a pretty bad example for kids — after all, the last place you'd want to sit if you were on fire is atop a gas-powered vehicle.

Even more embarrassing, the toy came with real light-up headlights, which would make sense if the Human Torch weren't already emitting plenty of light thanks to the fact that he's on fire [source: Taylor].

While researching this article it occurred to me just how badly it could reflect on a brand when licenses were handed out with abandon. It's truly impressive how some companies, like Barbie, manage hundreds of different licenses with few hiccups along the way. It wasn't until 2014 that Barbie executives finally picked a production company to launch a live-action motion picture — more than 50 years after the doll was first introduced. Another company that does licensing right is Lego, which carefully distributes licenses only to products that make sense for the company's brand and mission.