Browse the article 10 Classic Toys That Could Kill You 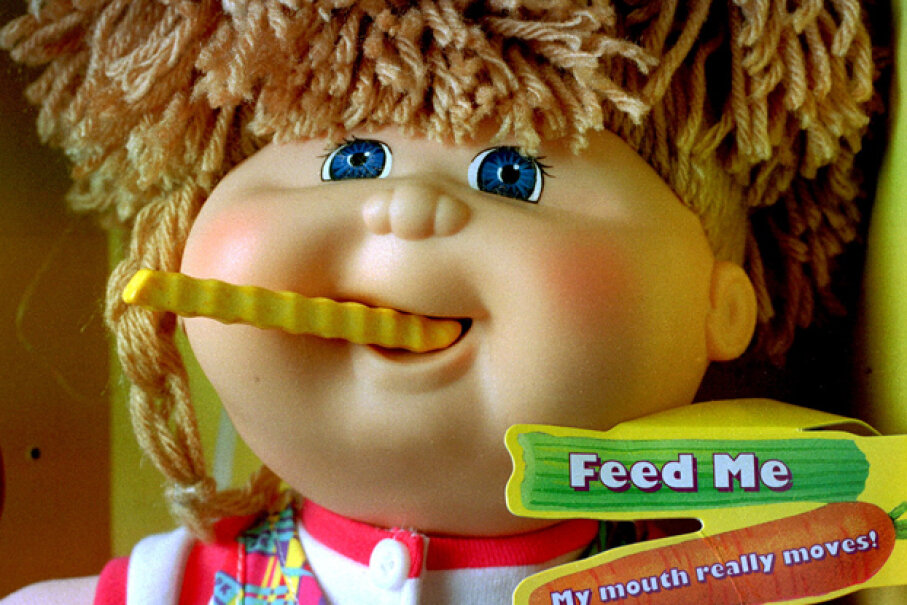 This Cabbage Patch doll seems so cute and harmless but one variation caused injury to some kids. See other pictures of classic toys. © Brooks Kraft/Sygma/Corbis

In 2012, an estimated 265,000 children were treated for toy-related injuries in emergency rooms [source: Consumer Product Safety Commission]. This doesn't even include the number of adults who were injured after playing with toys not meant to accommodate their size and weight. In a few cases, toys have even caused death.

We've rounded up 10 of the most dangerous toys in the U.S., many of which you probably already played with -- and survived. How close you came to danger may surprise you. Find out which hair-gobbling, projectile-firing, eye-gouging objects of fun made the list. 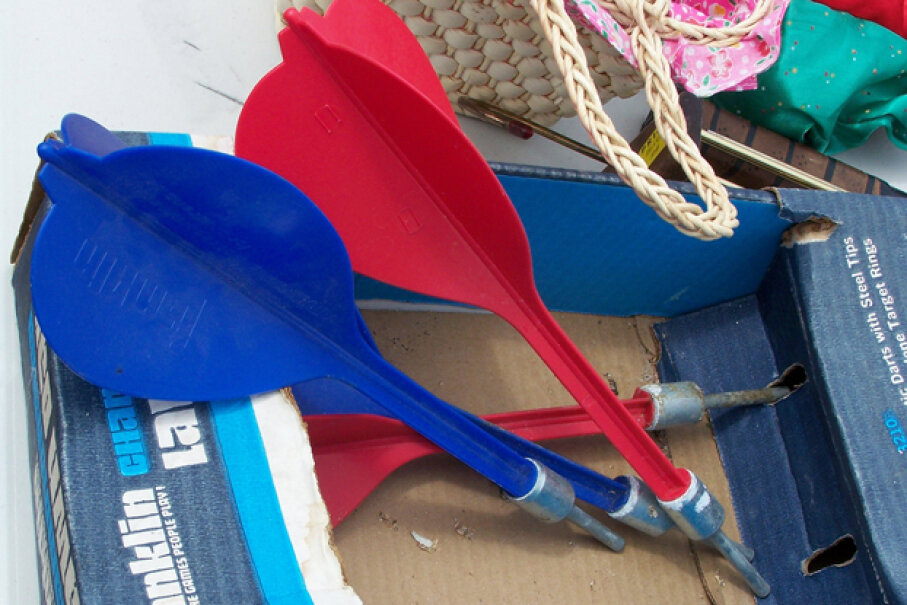 Even though lawn darts with steel tips have been banned in the U.S. since the 1980s, there is an underground movement of lawn dart enthusiasts who meet for tournaments. TheDamnMushroom/Flickr

Once upon a time, lawn darts was a game in which players threw steel-tipped foot-long darts at plastic circles up to 35 feet (11 meters) away. Although the backyard game's cheerful packaging showed the whole family merrily playing, it would have been more accurate to show little Jimmie with a bandage wrapped around his head. Turns out, the force of a thrown lawn dart was an estimated 23,000 pounds of pressure per inch, more than enough to pierce a skull [source: CBC Radio].

In the 1970s, lawn darts were supposed to be marketed to adults only, but few stores complied. After hundreds of reports of injuries -- and three deaths -- the Consumer Product Safety Commission, a U.S. federal agency, banned sales of lawn darts in 1988 [source: CPSC]. The lawn darts you can buy in stores today don't have steel tips, but feature the presumably safer rounded plastic ends with weights [source: Popular Mechanics]. 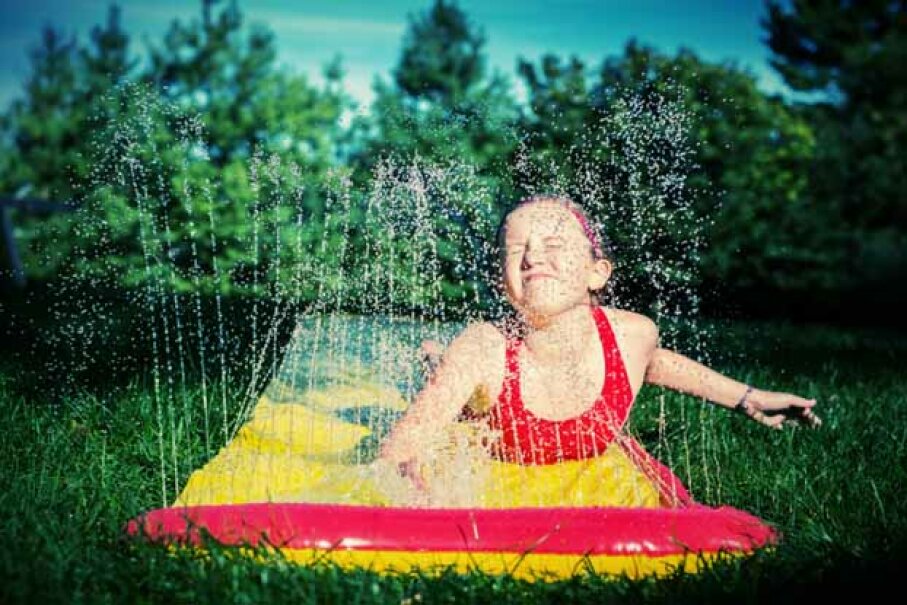 A girl enjoys the Slip 'N Slide on a sunny day. This is one toy best left to children -- unles you want to make one with an extremely long slide. Daniel Haug/Flckr/Getty Images

Since Wham-O first marketed it to consumers in 1961, more than 30 million Slip 'N Slide toys have been sold. A Slip 'N Slide is a 16-foot (5-meter) sheet of plastic with an inflatable "stop" at one end. There are small holes running the length of the sides, so that when a garden hose is attached, water spouts through the holes, making the plastic slick. The player slides down the wet sheet on her stomach, enjoying hours of cool fun on a hot day [source: Wham-O].

But the fun is meant for kids only. In 1993, the Consumer Product Safety Commission issued a warning about Slip 'N Slide use by teenagers and adults. Turns out, the slide wasn't long enough to accommodate their size and weight. The abrupt stop at the end, in some cases, resulted in permanent spinal damage. At the time of the warning, one teenager and seven adults had become paralyzed or received neck injuries after playing on the slides [source: CPSC]. The Slip 'N Slide was taken off the market, but it reappeared in the 2000s, with a prominent warning on the box to indicate it is for ages 5 to 12. 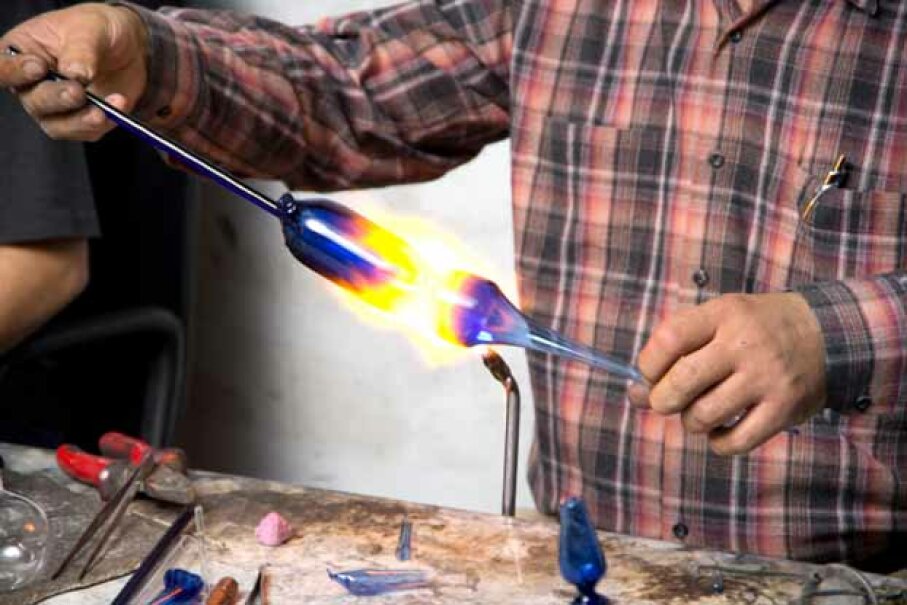 Glass blowing looks like a pretty dangerous affair. Imagine there was a time when it was sold as a children's activity. iStock/Thinkstock

Ever seen a glassblowing demonstration? There's blistering heat, molten glass and a hollow tube used to blow air into the volcanic glob. Oh yeah, and it's almost always a demonstration performed by an adult -- unless, of course, you were a child of the 1950s who was given a Gilbert Glass Blowing Set.

Luckily, the set contained a detailed instruction manual. The downside is that it spelled out ways to heat the glass to a malleable state, which is 1,000 degrees Fahrenheit (538 degrees Celsius), and then encouraged children to conduct dangerous experiments without the use of safety equipment. Although we seriously doubt cheap plastic glasses would have been much protection if a budding craftsman had completed one of the experiments that required inflating a bubble of hot gas until it burst [source: Young]. 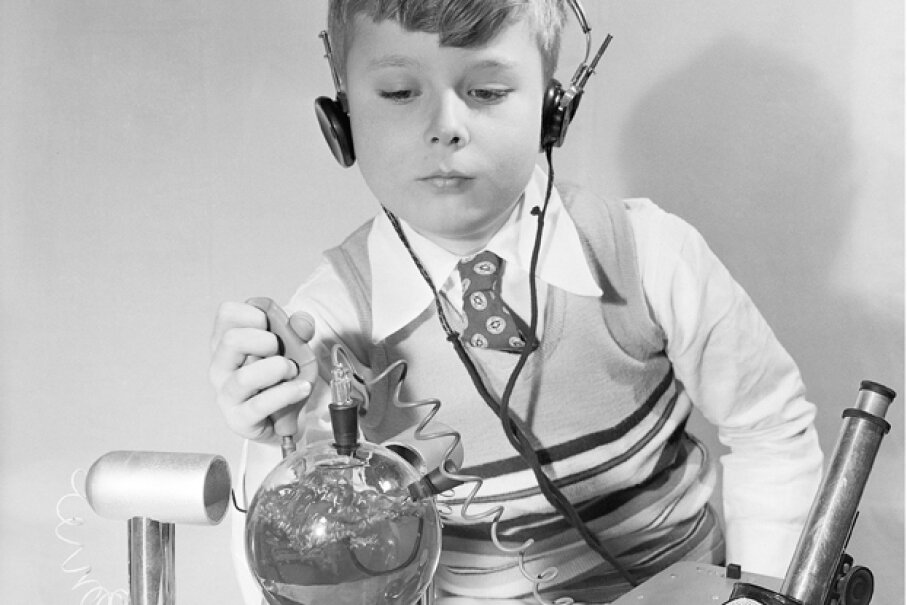 Back in 1950, the Atomic Energy Lab was on display at the American Toy Fair. Although it included radioactive materials, and a workable Geiger counter, the makers stressed the set was harmless. © Bettmann/CORBIS

A.C. Gilbert, inventor of the dubious Gilbert Glass Blowing Set and the perennially popular Erector set, released in 1951 what he hoped would be another big hit: the U-238 Atomic Energy Lab.

The briefcase-size set included a Geiger counter (used to measure radiation), an electroscope and three different types of uranium ore. Budding atomic scientists could follow instructions in the included booklets, "Prospecting for Uranium" and the "Gilbert Atomic Energy Manual." The latter had a form at the back to request uranium ore refills.

Alas, this radioactive play set was only available for one year. The $50 price tag was given as the explanation for its demise, but we think a few adults also had second thoughts about letting their kids play with radioactive materials [source: Oak Ridge Associated Universities]. 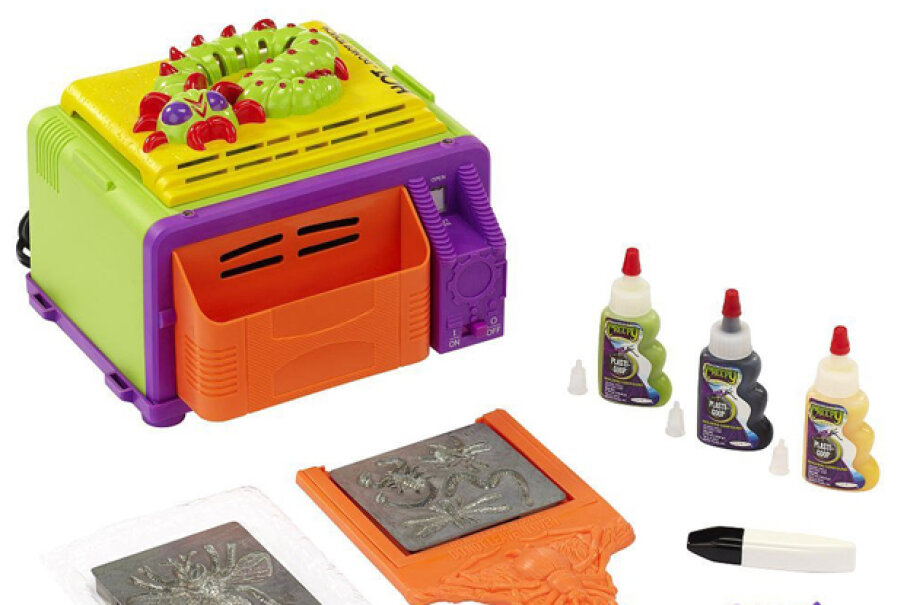 The current iteration of Creepy Crawlers features an oven that can't be opened until it is completely cool -- eliminating the possibility of burned fingers. Amazon

Let's dream up a toy for children, shall we? Let's start with plastic goop the consistency of syrup and add an electric-powered mold that heats to 300 degrees Fahrenheit (149 degrees Celsius).

This may seem like a dangerous mix, but these were the primary ingredients in Creepy Crawlers, a toy sold in 1964. The idea was to let kids mold their own spiders and bugs out of plastic, all the while breathing potentially toxic and deadly fumes. Oh, and burning their fingers on the sizzling hot plate, too [source: Retroland]. 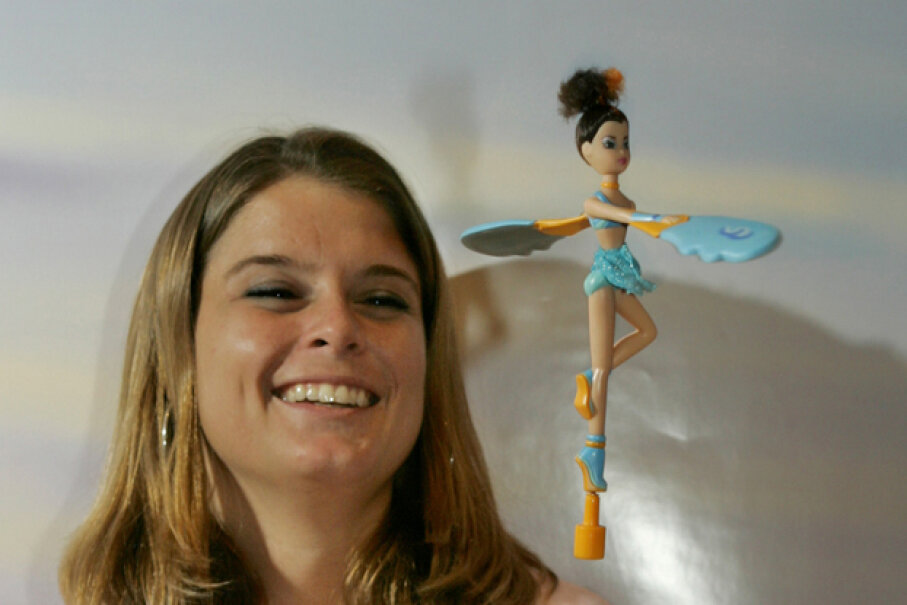 Sky Dancers had a propensity for flying off in unexpected directions. The redesigned version (shown here) was launched in 2005. © Ray Stubblebine/Reuters/Corbis

If you were a child of the '90s, you're probably familiar with Sky Dancers. These dolls had an impressive wingspan and a pull-string base. Simply put the doll on the base, pretend you're starting a push lawnmower and voilà! You've launched a spinning propeller that will fly in unpredictable directions. 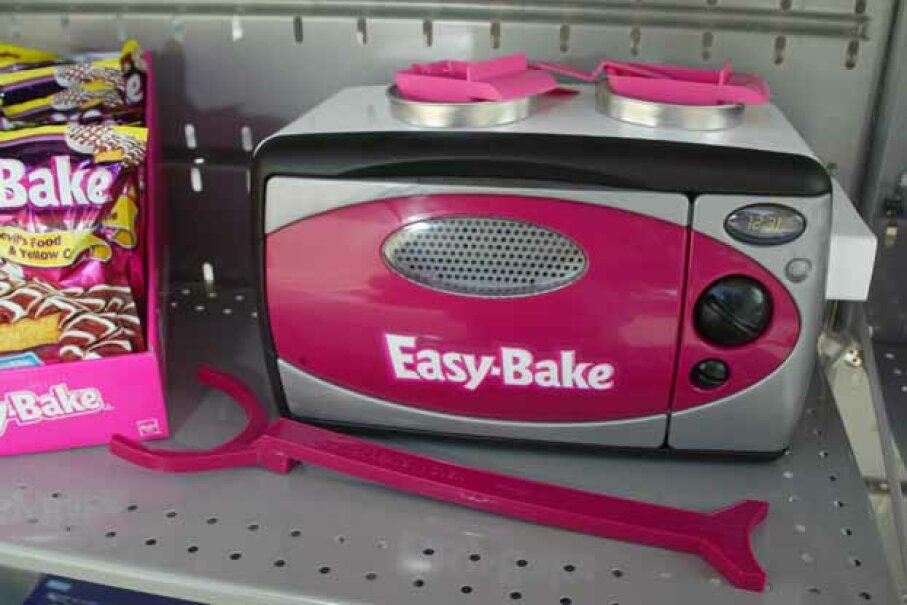 The current Easy-Bake Oven bears little resemblance to the model with the cooktop and front-loading oven that caught so many little fingers. Matthew Simmons/WireImage for Silver Spoon

You can still buy Easy-Bake Ovens and use them to bake miniature cookies and cakes, but one version of this popular toy was recalled by the Hasbro, the toy's manufacturer.

This purple-and-pink oven was modeled after a kitchen stove and had a mock stovetop and a front-loading oven, one with a tendency to trap children's fingers. The recall was spurred by hundreds of reports of children getting hands or fingers caught in the oven, leading to second- or third-degree burns from the heating coil. One 5-year-old girl even required a partial finger amputation. Nearly 1 million of these Easy-Bake Ovens were sold before the recall in 2007 [source: CPSC].

Cabbage Patch dolls, those iconic '80s toys that came with their own adoption certificates and famously squishy bodies, seemed so harmless. And they probably were until the Cabbage Patch Kids Snacktime Kids dolls rolled off the assembly line.

The Snacktime Kids dolls featured battery-powered mechanical jaws designed to mimic "real chewing action" when they were fed some plastic food. Unfortunately, the dolls didn't stop chewing, even when the "snack" was a child's finger or hair. One little girl even had to be freed by rescue workers after her hair became so entangled that her parents called 911. Although Mattel, the doll's manufacturer, and the CPSC said they found no serious safety hazard associated with the toy, Mattel decided to offer $40 refunds and entered into a voluntary recall in 1997 [sources: CPSC, New York Times]. 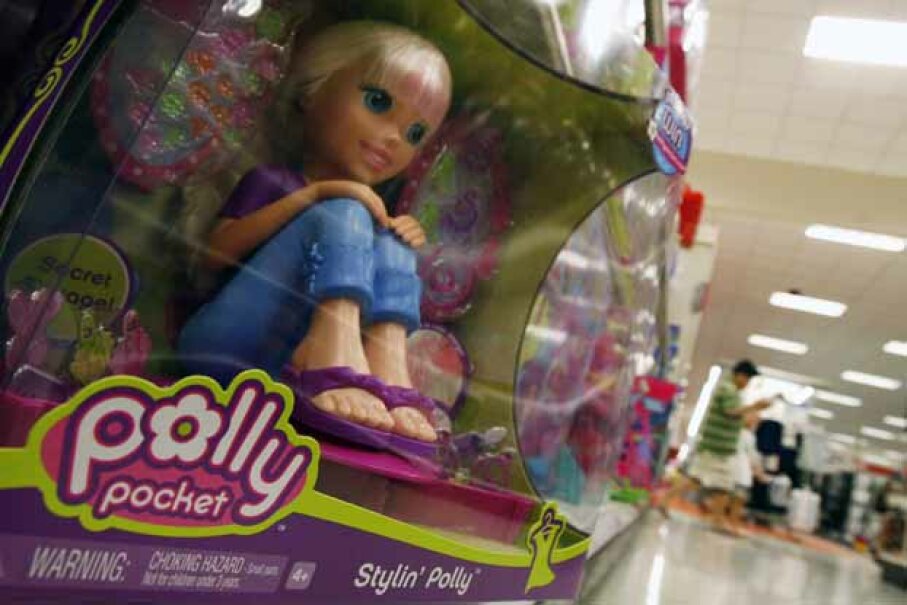 A Polly Pocket doll sits on a store shelf in Arlington, Va. in 2007. Mattel recalled millions of these due to reports of children ingesting the small, powerful magnets. © JIM YOUNG/Reuters/Corbis

In 2006, Mattel recalled more than 4 million Polly Pocket play sets -- miniature plastic dolls with magnetized clothes -- after children swallowed loose magnets. While the kids may have mistakenly believed the magnets to be candy, some teens used the magnets to imitate nose or lip piercings, and accidentally ingested them as well [source: Safe Kids]. In either case, they set off a potentially fatal chain of events.

When multiple magnets are ingested, they can connect inside the body, and tear through the lining of the stomach or intestinal walls, which may result in death. Surgery is required to repair the damage and remove the magnets [source: NBC News]. You can find redesigned Polly Pockets in toy stores in 2013. 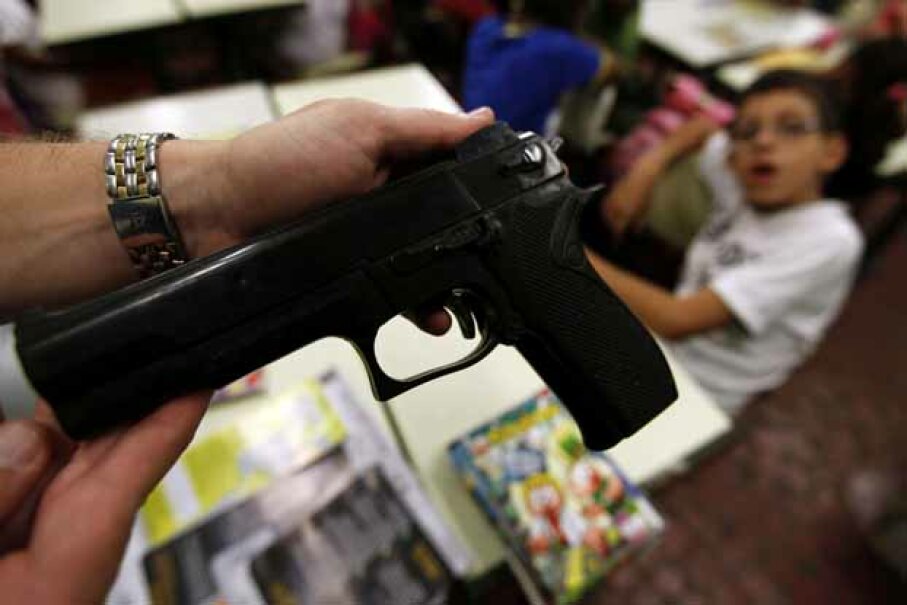 A police officer shows a toy gun next to a student during the Weapon is not a Toy campaign at Joao Deus Cardoso school in Sao Paulo, Brazil. © NACHO DOCE/Reuters/Corbis

In November 2014, a rookie police officer in Cleveland, Ohio, shot and killed 12-year-old Tamir Rice while he was playing with a BB gun. The policeman reported that he thought it was the real thing and feared for his life. However, the case remains open with accompanying allegations of racial profiling [source: Izadi and Holley].

Whether BB guns, airsoft, paint guns or simple toys, imitation firearms can turn play into a police matter. U.S. federal law since 1989 has required most toy guns to be outfitted with a bright orange tip on the muzzle or to have a brightly colored body. The boy's gun, which resembled a semiautomatic handgun, did not have these distinctive markings.

This killing was not an isolated incident. In 2007, San Diego police shot a teenaged boy with an imitation revolver in his car. In early 2013, police in Brownsville, Texas, killed a 15-year-old boy brandishing a black BB gun that resembled a Glock firearm [source: Ferriss]. Later that year, a sheriff's deputy in Santa Rosa, Calif., shot and killed a 13-year-old boy walking down the street carrying a replica of an AK-47 [source: Alexander]. Incidences like these make fake guns the most deadly toy of all.

Author's Note: 10 Classic Toys That Could Kill You

Researching this article was educational and a little humbling. I feel like I stay on top of safety at my house. There are regular smoke detector checks. I have a carbon monoxide detector. We discard broken or damaged toys, and try to stick with the classics instead of the flavor-of-the-month. Even so, we either have -- or have had -- seven of the 10 toys on this list. And survived!