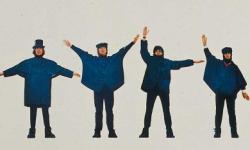 John Lennon wrote the lyrics to the song "Help" to express the pressures of fame.
Publications International, Ltd.

For a week in 1964, John, Paul, George, and Ringo had 12 songs on Billboard's Hot 100, including the number one, two, three, four, and five songs. Nobody before or since has accomplished that feat. The following list is a sampling of the Fab Four's music arsenal with 10 of their biggest hits.

During the recording session for their album Please, Please Me, John started to lose his voice. Producer Brian Epstein saved the recording for "Twist and Shout" until the very end. By then, John's voice was nearly shot and sounded strained -- in fact, he shouted most of the song.

For more information, check out Why aren't the Beatles on iTunes? and How John Lennon Works, or test your knowledge with the Celebrity Challenge Beatles Quiz.