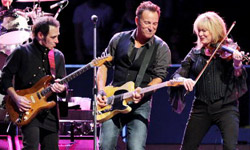 Named after a street in New Jersey, The E Street Band garnered major media attention while backing Bruce Springsteen in the 1980s, most notably on the Boss's mega-popular album Born in the U.S.A., which sold 15 million copies. But the band has played with many other musical giants since they formed in 1972, including Bob Dylan, David Bowie, and Aretha Franklin.